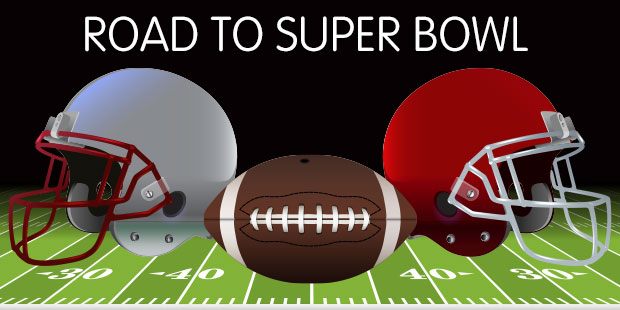 Join us on the road to Super Bowl LVII and win cash prizes, free bets and exclusive merchandise!

Super Bowl VLII is almost here! And whether you're a football fanatic or if you are just in it for the commercials, snacks or the halftime show, a combination of poker and football will make it just more fun.

The Super Bowl is the annual championship game of the National Football League. It is played between the winners of the league’s American Football Conference and National Football Conference. Millions of fans gather around televisions on a Sunday to celebrate this de facto national holiday. Broadcast in more than 170 countries, the Super Bowl is one of the most-watched sporting events in the world.

But enough of the facts, let's take a look at the schedule.

We will also run a special $5,000 GTD tournament on Championship Sunday!

*There will be satellites and freerolls available for a cheap buy-in!

Open the download version of your poker client or start our instant play poker app and visit our tournament lobby.

These freerolls award the following prizes to the top 10 players:

Every player who makes it into the top 10 will also be added to a special merchandise raffle!

We will have a special reload offer running from February 7th to 12th! Just check our Reload Bonus page and make a deposit to boost your bankroll!