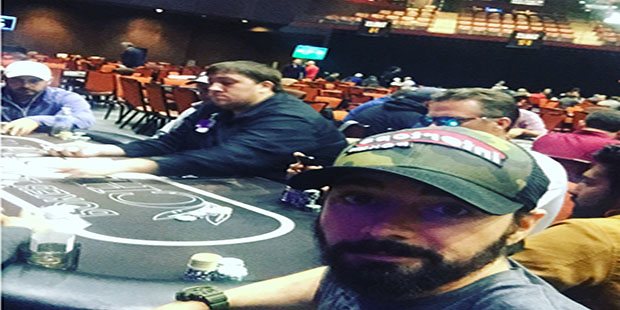 Wow, it’s really easy to slack on updating this blog!

Haha Usually it’s the writers block or fear of making myself look even dumber than I am, but at least this time it’s because too much exciting stuff has been happening to know where to start! (ok, maybe still a little bit slackin’ lol) Between live tourney events, Everygame St Maarten satelites, Youtube additions and training changes, it’s been a hectic few weeks! So I figured a few quick updates are in order to catch everyone up to speed before we get any further along!

Well first off I have to congratulate my good buddy Kamran Munaf for his insane run in the WPT main at Choctaw! Kam crushed souls the entire event, being in the top five chip counts for nearly the entire tournament! He had some good swings but overall just consistently added to his massive stack every level. His epic run came to a brutal ending though, when he bubbled the unofficial final table, finishing 10th. There were a couple HUGE hands that really wiped him out when they were down to the last two tables and there wasn’t much he could do after that. While I’m sure he’s dissappointed in not winning it all, it was a GREAT run and I expect him to be back in that spot soon to redeem himself! Hopefully we can get him in on the blog and Youtube channel to go over some of that experience!

Speaking of YouTube, Everygame and I are going to be doing a lot more with our channel to promote and grow the site. I will be doing some videos of the current tournament series running right now at my local casino, Winstar. The Winstar River series is a good size yearly event that brings in a lot of players from all over Texas and Oklahoma. With a 2 million dollar guaranteed prize pool for the Main Event, it’s been know to also have it’s share of big name pros swing through as well! They also have poker pro Maria Ho being the events sponsored player for added media attention. They run satellites all month leading up to a handful of events right around Memorial day. Hopefully I can scoop up a few of the cheaper satellites and free-roll the whole series! I would happy just giving the Main Event a real shot, but either way I’m gonna try and get some good highlights to share!

As far as the Fitness challenge goes, overall I’m still happy with what I’ve done so far, but still have some stuff to improve on for sure. I’ve managed to get from 144lbs to about 155lbs in about 3 months, so I’m happy with that for sure, but Ideally I would like to get back to about 170lbs before I’m really satisfied. I’ve been on point with my training around my Sciatic nerve/Piriformis issue, enough so that I’ve actually gone right back into a “normal” training routine. While I’m still dealing some some pain and needing to modify certain exercises, it still feels really good to be able to get back into that zone with training. There’s just something about being on a planned out exercise routine that seems to center me, and carry over positively to all other aspects of my life. There’s been a few “hiccups”, especially with traveling for the WPT Choctaw, but I suppose that’s to be expected. The consistency is really the biggest thing, with nutrition on Tournament days in particular, but sometimes you just gotta make due with what you have and focus on Poker lol. (Plus fried chicken N waffles are an AMAzing comfort food after busting out late in a tournament! lol)
Everygame St Maarten

Last and not least of course is the Everygame St Maarten WSOP circuit satellites going on right now! Last Sunday we gave away the first seat and some lucky winner is on their way to play the WSOPc main event! If they can pull themselves away from the beach that is! We are giving away a few more seats, and the next round has already started! Win your way to this dream package from as little as 3 Bucks!! The next event is going to be Sunday the 27th, so be sure to hit the tables now to get ready! Everygame and TKPT run one of the most entertaining series down there and you don’t want to miss this one! I hope to see you there!

PS that Everygame player XXGlorynbaes in the feature Photo! He was my dealer a few times for WPT Choctaw! Small World! lol