“It’s Not about the Money” 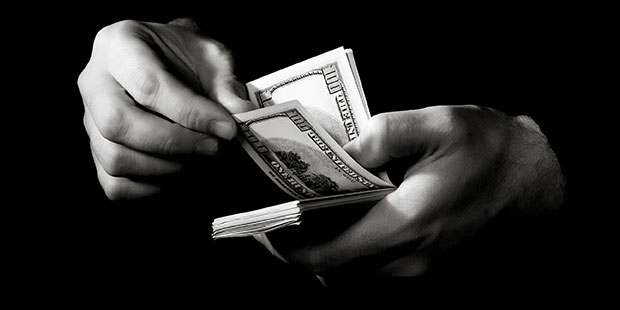 “You have to have ZERO respect for a dollar when you play tournament poker!”

This was the advice I received after busting a recent tourney. I was venting/reviewing with a friend, who is a much better player with A LOT more experience, and he was quick to hit me with this line. We were going over a particular series of hands from the 300k GTD at the Winstar river series in which I went from nursing a short stack for hours, to a sudden heater that propelled me up to almost chip leader at the table. It was a 4-5 hands blitz that had me feeling pretty amazing, but then on the 6th hand a found myself in a gross spot that could have( and probably should have) resulted in getting those new found chips all in! As I discussed the hand history, I mentioned to him that I felt the urge to “save” the chips I had just finally acquired after so patiently waiting all day! He immediately was no longer concerned with the hand history and went right into questioning my mindset and bankroll. “If you want to be a great poker player, you have to have ZERO respect for a dollar when you play poker…as bad as it sounds, it’s true and unfortunately, that’s why so many people become degenerates!” Yikes, straight to the point and brutally honest, but exactly I needed to hear! Suddenly, this seemingly basic hand history review had turned into an explosion of questions about the inner workings of my game! Why was I fearful to lose those chips? Had I been playing scared?

The hand history itself was past around and I received several different viewpoints on it, but to this day, I’m still unsure what the correct play was lol So I think I’ll save that for another post, as the more important point was made, maybe THE most important point of my whole poker career!?

Have I been letting the “money” effect my decisions?

I think we’ve all heard that phrase about being numb to the money in poker. Win or lose, you can’t let the thought of what that money means to you in the real world influence your decisions at the table. All that should matter in the moment is making the correct play. If you bust, you bust. If it’s a tourney you just re-buy or play the next flight. In a cash game you simply reload at the table and move on the the next hand. It’s just standard practice for almost every player I know, myself included. Hell a few times I’ve witnessed friends fire over 10 bullets at a single tournament, with buy-ins ranging from $150 to $1650! I’ve also watched as they reach into their backpacks for another brick of hundreds after getting stacked for the 5th or 6th time. While I’m sure it seems absurd to most normal people,(and it should be) unfortunately for us poker players, that’s kinda just the way it goes sometimes. We chalked it up to variance, running bad, or being unlucky. We just call it a “standard” part of the game and move on. We aren’t being degens, the run bad is REAL, right?! lol

“Nah, it’s definitely about the money…”

Seriously who burns all that money!? lol Don’t listen to the Joker up there, its always about the money! Well of course, being the best poker player you can be should be the ultimate goal for any seriously player (Sending a message? lol). Hmmm, so I guess for poker players, this quote should say something like “Send them the message; It IS about the money! ” So by showing your skills as a player, you plan on beating them and taking their money!? lol;) All joking aside, at the end of the day, it’s about making money. It’s what makes the poker economy go round! If you play professionally, you need to be earning and saving money to support yourself and possibly your family. You can’t be blowing through 10 buy-ins every weekend, when that money could have been your mortgage payment! It may not be as serious for you if you’re a recreational player, but not making money still means you’re not WINNING and what’s the point of competing if you can’t WIN? So no matter Pro or Rec player, the question becomes; What separates a typical “poker player” and from being a true Gambler. Where do we draw the line? Are we being financially irresponsible or making sound poker decisions?!

“Every beginning has an end…”

After continuing to hear my friends advice repeat in my head every time I’ve sat down to play since that day lol I realized I had to take a l hard look in the mirror and ask myself; Am I a poker player or am I a DEGEN? I mean I like to think I’m still pretty tame compared to a lot of players out there. Never being THAT out of control, but I’ve clearly made my share of mistakes. I’ve re-bought when I knew I shouldn’t, I’ve played above my means, played in bad games, played too many games at once, etc. You name it, I’m sure I’ve done it at some point, but at least I’m finally here asking, why did I do it? Have I been making the correct plays every time and just getting unlucky or have I been blind to my errors and just convinced myself what i was doing was “standard” !? Why it has taken me this long to really stop and think about it!? To realize something needs to change?> So many questions and only one answer comes to my mind…Bankroll Management. The problem and the solution are the same. For me, sound decision making in poker starts with sound Bank Roll Management. Also it’s the only real thing I can control to prove to myself that I’m a winning player. So in the next post I’ll discuss general bankroll management strategies, outline my plan, and officially kick off my Everygame Bankroll Challenge.

PS: use promo code TOK2017 with the link to help build you’re Roll!