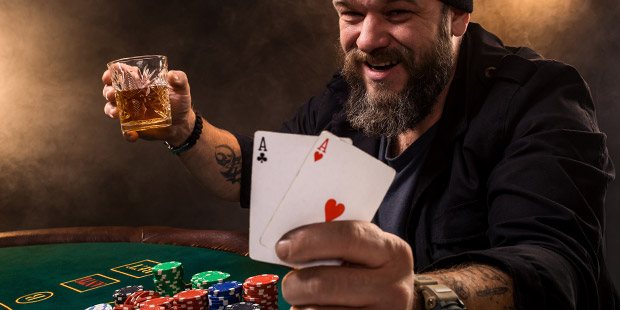 We all like to drink a little. We love parties with alcohol. We also know not to drive after we've had some drinks. We need to realize that the same good advice applies as well to playing poker: if you drink, don't play.

Do Playing Poker and Alcohol Mix?

No, not really....alcohol messes with our cognitive thinking, emotions, stability, memory and more.  All things that we need to be as sharp as can be while we're playing poker.  Think of poker as a sport....and no one drinks while taking part in sports, right?

Is it Okay to Drink A Little Alcohol Whilst Playing Poker?

We all know that land based casinos offer players free alcoholic drinks.  They do this for two main reasons.  One, because the free whisky, wine, or beer will keep the players going longer at whichever game they’re playing.  Secondly, people lose more money after they have had a couple of drinks than before.
If you’re playing slots, the alcohol won’t make a lot of difference.  That’s because slots are a true game of chance.  But if you’re playing poker, alcohol will make a huge difference.  Here are some of the latest insights into how alcohol consumption will surely affect your ability at the poker table.

What about Online Poker?

When you play poker online, no scantily-clad hostess will offer you a free drink.  You’ll have to get the drink yourself and pay for it out of your own pocket.  The cost or availability of alcohol is not the real problem.  And the real problem with alcohol whilst playing poker is the same whether you’re playing at a land based casino or if you’re playing at an online poker site.
The problem is that alcohol affects cognition and cognition is the stock-in-trade of poker players.

Everyone who has ever been drunk knows that too much alcohol makes us stumble about.  Our speech becomes slurred.  If we were very drunk we might have passed out.  None of these effects of alcohol is of interest to us here.
Here we are interested in the more subtle effects of excessive alcohol consumption: impaired cognition which means we think much less well and impaired memory.  A good poker player uses a trained and powerful memory to calculate the possibilities regarding of his or her next decision.

If You Drink, Don’t Gamble

In recently published reports from the Townsend Treatment Centers, even occasional users of alcohol show reduced decision-making skills after a single drink of whisky.  It takes longer for beer to have a damaging effect but many people treat beer like they treat soda pop so they get the alcohol inn their system anyway.

Drinking as a Social Event

There is no doubt that alcohol is part of the Western social construct and is consumed in greater or lesser amounts in every country save the Islamic countries where alcohol is prohibited.
As an aside, we might mention that Islamic societies tend to drink strong coffee and smoke cigarettes to excess and that, too, has negative effect on cognition.
We aren’t saying that you should become a monk or a teetotaler; we’re saying that even one drink of alcohol will impair your ability to make the best decisions in the session you’re playing - then and in your ability to become a better poker player.

Look at the Pros

A professional poker player will not drink whilst playing.  You might bump into her or him at the hotel bar later but they might drink water or juice whilst playing.  It all gets back to the main characteristics of the best poker decisions and actions.

We have said in other articles that you have to observe every action of every opponent on very hand.  Even on the 70% or so of hands you fold early, you cannot take a break.  You have to watch the people still in the hand because you can learn a lot from watching them.
Alcohol won’t stop you from watching.  It won’t make you take off some hands.  Alcohol will impair your ability to process what you see.  If you drink whilst playing, you’ll finish a session and find it difficult to remember anything of importance about any of the people you played against.  You won’t remember how a few really interesting hands went.

Alcohol reduces inhibitions.  You might be the life of the party after you’ve had a drink or two, but at the poker table, too much alcohol will drive you to make decisions out of emotion rather than out of cold calculation.  Daniel Negreanu seems like the classic hail fellow well met as he talks and jokes around the poker table.  That’s all part of his grand bluff; in reality he is a cold and calculating player who will take the money of anyone who underestimates him.
When we go back in a hand and try to figure out if our opponent is bluffing or has the nuts, we have to be unemotional.  Alcohol in the bloodstream makes it impossible for us to do so.
Becoming overly emotional is part of the increased impulsiveness of players who have had too much to drink.  Impulsiveness might be a bit innocuous such as staying in a hand too long and losing a little money.  It can also mean throwing caution to the wind and going all in with a very borderline hand.

As we said above, if you drink whilst playing you might find it impossible to process observations for retrieval later.  Poor memory also affects our play in the immediate moment.  A player under the influence of alcohol might forget how to calculate pot odds or other statistical subtleties of poker.

Why Do People Drink at the Poker Table?

There are really just two reasons why some people drink whilst playing poker and some don’t.  The first reason is the obvious one: they are used to drinking in social situations.  Here, you have to understand that poker is not a social situation.  It is as much a competition as any competition in sports, business, or politics.  It might not be cutthroat but it is a competition.
If you were at a true social gathering and someone tried to turn it into a competition, you would try to stop them, you might leave, or you might stay and be very uncomfortable.
It is a big mistake to try to turn a poker competition into a social gathering by injecting alcohol into it.  The others won’t take the bait and you’ll find yourself at a big disadvantage if you drink.

The second reason some people drink whilst playing poker is simple boredom.  You muck about 70% of your hands before the flop.  Your fold after the flop doesn’t help you.  It gets boring.  The great Robert Pirsig had something to stay on this subject in his book Zen and the Art of Motorcycle Maintenance.  He said that every job gets boring at some point and you have to look for Quality ways to overcome the boredom.
We don’t have space to go into a long explanation of what he meant by Quality.  In our context, it means finding ways to make paying attention to hands you’re not in, interesting and even fun.  You have to look for the ways of doing so that work for you but as sure as that the sun will rise in the East tomorrow, alcohol is not one of those ways.