Poker is the Most Responsible Casino Game 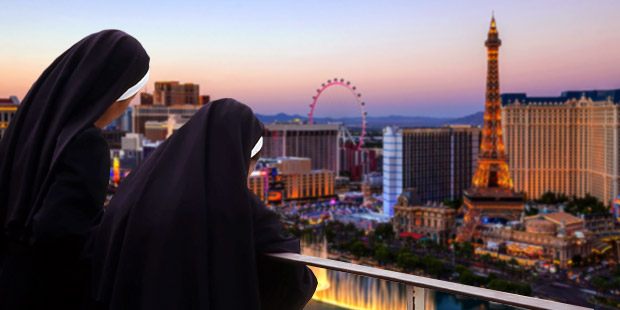 Two nuns in Los Angeles stole about $500,000 from their church school to pay for gambling trips to Las Vegas.  The story has aspects in the area of responsible gaming.  By its nature, poker lends itself to responsible gaming more than other casino games.

A shocking story with tangents in the areas of responsible gaming, religion in our time, and even the benefits of online gaming over land based casino gaming is emerging out of the Archdiocese of Los Angeles where two nuns have admitted to having embezzled hundreds of thousands of dollars from the Catholic Archdiocese in order to fund luxury trips to Las Vegas.
At this writing, the story is still emerging.  The two nuns, Sister Mary Kreuper and Sister Lana Chang apparently stole around $500,000 from an account that held students’ tuition money and charitable donations.  Although this is a criminal case, the Archdiocese is not planning on bringing charges against the sisters.

Online vs Land Based Gambling

Whilst this specific case has ramifications in other areas, we might point out that it does tell us something about the difference between gaming at home or at a land based casino.  We don’t know how much the nuns gambled, if they used the money mostly to fund luxury hotel stays, expensive restaurant meals, and shows but we can assume that at least a large portion of the money went to gambling.
Of all the casino games, poker is the one in which problem gambling can be best controlled.  Poker goes much slower than any other casino game.  Players need to think hard about every decision.  Even if you know that you have the best hand, you need to determine how much you can bet and not force others out of the pot. This contrasts with slots where no thinking is needed at all.
Furthermore, when you play poker online, you can control your gaming time.  Since you’re at home—or in the case of mobile gaming, close to home—there are no travel costs.  If the nuns had been able to play online poker, slots, blackjack or any other game, they would not have needed to steal as much as they did and probably would have been able to better control their gambling urges.  So, by not allowing online gaming, the state of California, in a sense, encouraged the nuns to travel to Las Vegas to gamble.  Of course, the state did not encourage the women to steal money to fund their trips!

This case also demonstrates that problem gambling can arise in any and every demographic.  In this case, we have two long time best friends stealing money from a Catholic school.  The nuns are now retired.  Sister Mary Kreuper was the principal of the school for 29 years and Sister Lana Chang taught at the school for 20 years.
The allegations are that the nuns began embezzling the money about ten years ago.  That means that they were well into their careers as educators long before they began stealing money to pay for trips to Las Vegas.   We might ask: What happened ten years ago to these devoted nuns that they started to steal money from their church’s school to pay for casino gambling?
Responsible gambling has to be in the forefront of any thinking about gambling in any form.  As states and other jurisdictions around the world look to gambling as a source of much needed tax revenues, will we see a rise in irresponsible gambling?  What can casinos and governments do to reduce the scourge of problem gambling?

There is a clear religious side to this particular case.  Did the nuns suffer a mutual crisis of faith?  Did they believe their own teachings during the years that they were gambling away tuition and charity money?  Were they still faithful to their religious and educational callings?  It is true that we hold people in high positions in a religious hierarchy to a higher standard.  Does that say something about modern society having lowered its own standards for non-religious leaders?

The sisters belong to the Sisters of St. Joseph of Carondelet order of nuns.  The order released this statement: “The sisters have confirmed the misappropriation of funds and have cooperated in the investigation. Our community is concerned and saddened by this situation and regrets any injury to the long relationship with the families of the school.”
Monsignor Michael Meyers of the church wrote a letter to his parishioners: “Sister Mary Margaret and Sister Lana have expressed tome and have asked that I convey to you, the deep remorse they each feel for their actions and ask for your forgiveness and prayers.”

The church said that they discovered the so-called misappropriation of funds during a routine audit.  They did not say why they do routine audits only every ten years.  The nuns hid the embezzlement by writing checks and depositing them in an inactive account.
If no charges are ever brought against the nuns, the details of how and where they stole the money and hid their theft will be important only to outside observers.

This appears to be a classic case of irresponsible gambling with the religious twist.  The nuns “show remorse”.  They went to great lengths to “hide” their activity.  They appear to have known for some time that they had a gambling problem.  Despite being aware of their gambling problem, they either were in denial or didn’t know how to deal with it.
Gamblers need to know where to turn for help when they become aware of a gambling problem.  This has to be as much the responsibility of casinos and governments that encourage gambling as much as it is the responsibility of the problem gamblers themselves.

Where Were the Nuns?

Over a period of ten years, two middle-aged nuns, great friends, “disappeared” for days at a time.  No one seemed interested in their whereabouts.  We live in a society in which people jealously protect their privacy.  As such, even in an order of sisters, no one would ask where two nuns go on weekends?

Land based casinos are far more than no frills avenues for gaming.  They encourage luxury spending in many other forms.  If average citizens and politicians are looking for ways to reduce problem gaming they might actually reverse course and place heavy regulations on land based casinos and legalize online casinos rather than demonizing online casinos, their gamers, and operators.