The US is soon to become an online poker haven 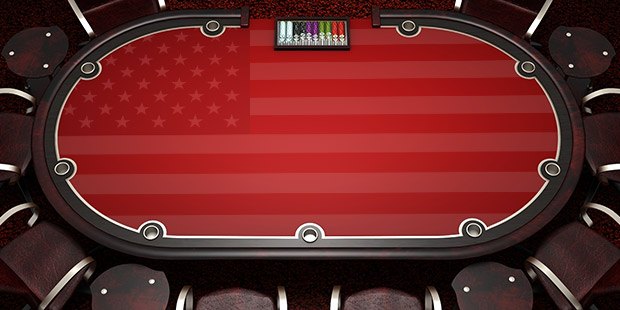 The United States has been a sleeping online poker giant for over a decade as the law that nearly destroyed the online gaming market is under renewed pressure from the states.  Many states are looking to legalize and regulate online gaming and poker.

Ever since the United States Supreme Court ruled that the law from 1992 that had made sports betting illegal in 46 of the 50 United States was unconstitutional, sports betting in the U.S. has become newsworthy almost every day.  Along with sports betting comes daily or weekly news about online casino gaming and online poker.
The laws governing online casino gaming and poker online are too complex for a short blog but suffice it to say that the difference between slots and poker lies in the skill level needed to play poker as opposed to slots.

It’s difficult for many people from outside the U.S. to get a strong sense of the way the American political landscape is organized.  So, here we will give a very basic introduction to it and then we’ll see how it affects online gaming and poker.
The United States, by law, are actually fifty independent “nations” that are united to perform certain acts together that the individual states would be hard pressed to perform individually.  Defense is one such area.  Central banking is another.
The central government in Washington long ago began taking upon itself more authority than the constitution allowed but that is not the issue here directly.  The issue is that each state retains a large amount of legislative power.  One area where states can still affect their own will is in the area of online gaming.

In 2006, the U.S. Congress passed a law called the Unlawful Internet Gambling Enforcement Act (UIGEA) which effectively closed most online gambling sites.  However, the states can still permit online gambling that requires skill rather than pure luck for the gambler to be successful.
In May 2018, the Supreme Court voided the law that had made sports betting illegal in all but four states.  As a result, many states have already implemented legal sports betting or are considering doing so.  In this article, we will review some recent developments in online poker as it relates to newly legalized sports betting.

This is a big state in the center of the country.  It was once the leading state for car manufacturing but it has fallen on hard times.  The state needs tax revenue from gambling activity to restore the state treasury to solvency.
On December 23, just minutes before the state legislature recessed for the legislative season, it passed a law that will legalize online gambling.  The law actually fast-tracks online casino gambling and online poker before it also allows online sports betting.
The last-second law passed the legislature overwhelmingly.  It demonstrates the feeling state legislators have that online gambling in all forms, not just casino gaming, is an untapped source of revenue.  Still, the biggest untapped source for revenue will prove to be sports betting.

Although sports betting was illegal in all but four states from 1992 until 2018, land based casino gambling has been legal in almost every state for many years.  Where once Las Vegas and the state of Nevada dominated land based casino gambling and only New Jersey followed with casinos in Atlantic City, today there are hundreds of land based casinos throughout the fifty states.
Naturally, these business interests would like nothing more than to keep online casino gaming and online poker illegal for as long as possible.  These land-based interests have a lobbying arm that tries to make states implement onerous regulations on any online gaming site.  These efforts are slowly failing in many areas in the U.S.

This is an area that states and online poker rooms agree is a win-win for all sides.  In effect, it means that players who live in one state can use the online poker facilities of another state as long as the two states have a joint agreement to allow it.
These are called player pools and with 10,000,000 residents, Pennsylvania would double the size of the player pool that now Nevada, Delaware, and New Jersey share.

These three large states are often cited as the next in line to pass online poker legislation.  Nevertheless, each has difficult obstacles in the way of a clear path to legalizing online poker.  Each of these states is losing population due to high internal taxes and a poor business climate.  They are not the only states with high state taxes and laws that make businesses think twice about locating there.
So, whilst these states may pass legislation legalizing online poker in 2019, there are many other states that may get there first.  There is no secret that Mississippi was quick to implement legalized sports betting.  Mississippi is also feeling some competition from neighboring Louisiana.
West Virginia was another state to get on the sports betting bandwagon quickly and can be expected to look closely at the potential for legalizing online poker.  West Virginia is a state with a small population but if it can join the player pool, it will benefit tremendously relative to its size.
Illinois desperately needs new sources of revenue and the state is losing population fast due to high taxes and perceived political corruption.  As those leaving the state are normally those with the highest earnings, the state is in even worse shape financially than most other states.

The United States is something like a dormant volcano that suddenly comes to life.  With 330 million residents, the potential for all forms of online gambling including poker is almost limitless.  The illegal sports betting market was estimated at $80 billion annually.  The legal online poker market will be smaller yet it will be substantial as the Chris Moneymaker poker boom shows little sign of ending.