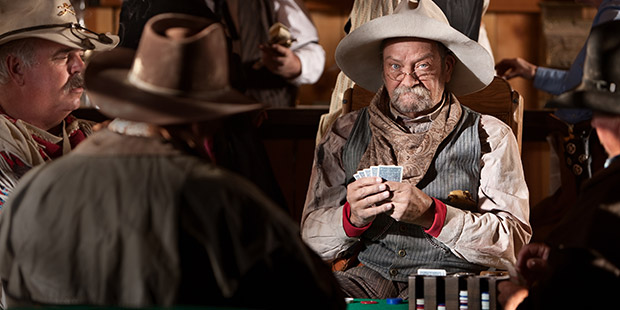 Until just recently, which we would date at about the time chubby Chris Moneymaker won the WSOP tournament in 2003, poker still had the image of a saloon game which as often as not was settled with a six-shooter and not just the cards on the table. The image had long outlasted the reality. Suddenly, the image changed.

Poker has Matured from a Cowboy Game to an Intellectual Game

American folklore and the movie industry combined for generations into making poker seem like a traditional American saloon game. The term saloon itself harks to a smoke-filled room where cheap whiskey combined with the unshaven hard men of the old American West. The game they played was poker, so poker had the reputation of a game of hard men, hard drinking, and hard losing.

A New Type of Hero

Chris Moneymaker was, in his appearance, the quintessential opposite of the hard man of the old American west. He was pudgy and a bit soft. But he won the taxing World Series of Poker and poker has never been the same.

If the diametric opposite of a he-man could win the WSOP, then he must have won through guile and intellect. In addition, Chris Moneymaker came to poker from the online poker rooms of the time. By winning the tournament, he, in one fell swoop, took the new technology of poker online and used it to create an entirely new image for poker—that of the intellectual game par excellence.

Chess is a spatial game in which the players see everything “over the board”. There is a tactic in chess called “to sacrifice” which is as close to bluffing as we may find in chess.

Chess players like to talk about complex positions in which there are millions of permutations. A simple move now may bear fruit many moves ahead or may be thwarted by an insight the opponent comes up with. The permutations may be compared to the concept of hand ranges which is a very modern development in poker.

Poker players always ask themselves “what can he have?” But now, this simple question is evolving rapidly to comprise a more sophisticated view of our opponents’ hand ranges in combination with our own hand ranges. The entire concept of ranges is still so relatively new that we are sure that it will surely be developed further in the future.

It is also interesting that, where chess players try to see as many as ten moves ahead, poker players are happy to see one of two moves ahead. Then the hand ends.

It is also very significant that the most popular poker game today, Texas Hold’em has only two hidden cards for each player. These two cards, plus the simple fact that money is involved, force poker players to learn tactics and strategies that chess players never need to learn.

There are simply many, many more poker players today than there were twenty years ago. Each of these players has access to all the modern concepts generated by computer analyses of the vast minutiae of poker.

We now have to determine whether a player has bet within a “linear range” or a “polarized range”. As it turns out, the natural tendency of relatively new players to bet with a linear range when they first go out of their original comfort zone of only raising with the five best hands, has been replaced by new players immediately accepting the need to use a more complex, and more risky, polarized range.

It isn’t necessary to become a full-fledged vegan, as Daniel Negreanu has, to compete in poker tournaments but as the number of players has risen exponentially, the ability of many more players to withstand the rigors of tournament play has also greatly risen.

This means that poker players eat better, sleep better, and exercise more than they ever did before.

Competition is also finding its way into shark-like exploitation of short stacked opponents. Once again, this is a betting tactic that was always with us but now even the most neophyte players are using intimidating tactics against more experienced players.

Modern players use every mathematical tool at their disposal to determine which bet is best in many situations. Thus, everyone has to understand such concepts as pot odds, implied odds, equity, expected odds, and betting for value.

The internet and the easy availability of good didactic software have made students out of poker players. Many players record as many hands as they can to study them and use software to simulate thousands of hands.

The influence of these visual media cannot be underestimated. The camera which allows viewers to see the players’ hole cards adds a layer of excitement so that many people who rarely or never play poker find watching poker entertaining. The additional viewership increased prizes for participating players and the snowball effect took place wherein players were making more money so more people watched which allowed players to make even more money and so on.

Poker is evolving even as the basics of the game remain the same as they were generations ago.