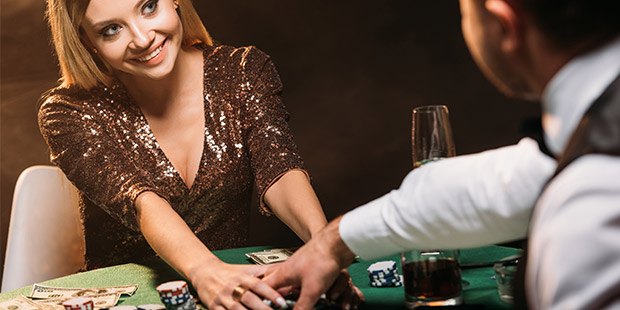 Poker is a game in which the fear of loss is always at or just beneath the surface.  Since we can’t eliminate fear, we need to learn to use it to our best advantage.  This can result in causing an opponent to fold a winning hand or can simply allow us to shrug off a bad beat.

In Poker, Use Fear to Your Advantage

There is a pervasive feeling amongst the less experienced online poker players that fear is something to be feared.  This is a big mistake.  In fact, it is one of the biggest mistakes poker players make.  The fear of losing hems us in and makes us less aggressive and more timid.

Fear is an unavoidable aspect of poker and in fact of almost everything we do. Playing poker online does reduce fear because it reduces the tells that telegraph information we want to keep hidden.  But even online poker can’t eliminate fear entirely.  The proper attitude towards fear is that it is a good thing.  Fear is like pain; we would all like to live in a world without pain.  But in the real world in which pain exists, we can use pain as the push we needed to go to the doctor and have a test done and find out what’s wrong inside our bodies very early so we can be cured.

Fear of Getting Bluffed by an Amateur

There is no denying that Phil Helmuth is a great poker player.  But every great player has a weakness and Helmuth’s weakness is the fear of losing to an inferior player.  We are not talking about a player who is marginally less adept at the game than is Phil Helmuth.  We are talking about a player who in chess terms would be labeled a “wood pusher”, someone who truly doesn’t know what he’s doing.

YouTube is rife with clips of Phil Helmuth hitting tilt because he lost to a rank amateur because Helmuth could not bear the possibility that he might lose to such a poor player.

The image that most poker players want to cultivate is a stoic, unemotional type who can remain completely deadpan even when he has the nuts and is hoping to get a lot of action.

The poker face belies the deep swells of emotion that underlie it.  A lot of players go against nature and try to deny that there is such a swell of emotion beneath the surface and the façade.

When we have the nuts and are hoping for some action, we do need a strong poker face but it’s a mistake to deny the emotion that is roaring just beneath the surface.

A lot of people don’t understand money.  It is for that reason that so-called cryptocurrencies have entered the money marketplace.  These alternative forms of “money” exist for only one reason: there are people who fear that government money will crash and lose massive amounts of value and that only the cryptocurrencies will survive to have purchasing power.

Poker players need to accept the idea that it hurts to lose money but only by losing money can we learn how to win money!  This is the first lesson in cultivating fear in a positive way.  We need to accept—even embrace—our fear of losing in order to develop the skills necessary for winning.

We are told all the time to play only the best hands as we enter the world of real money poker.  Still, we know that the better players will limp in with very “poor” hands.  They do this because they want their opponents to be unclear of what they actually have.  Even if they lose some money on this particular hand, by staying in the pot for another round, they have turned the fear against their opponents rather than turning it inward onto themselves.

Fear of losing money or of being bluffed successfully by an amateur cause us to lose objectivity.  Instead of analyzing the hand at hand, we feed into our fear and are more prone to making irrational decisions.

Evolution played and continues to play a role in our fear at the poker table.  Early man faced life and death dangers every day.  He learnt to deal with a dangerous situation quickly, without resorting to rational analyses of the dangers involved, and most often lived on.

The entire human race owes its existence to the cultivation of quick responses to fear predicated in the real danger of being killed that our far ancestors used to survive.

At the poker table, no one is in danger of being killed by a bear or a mountain lion.  We don’t fear the weather like ancient people did.  That’s because we understand the weather a lot better than they did.  The only real fear we have at the poker table is losing some money or of being embarrassed by poor judgment.

We can live in poker terms simply by accepting two things: one, that the fear of losing will never dissipate completely and, two, we are going to lose a lot of hands no matter what we do or how well we analyze the situation.  Fear doesn’t keep us from losing; fear keeps us from learning how to win.

The very notion of a tell in poker is that some players show their emotions.  When they have a good hand they react differently than when they have a poor hand.  Most often, a tell is a function of how directly we let the fear of losing a hand come bubbling up to the surface.  Conversely, a tell when our hand is strong is usually based on the fear that we won’t win enough on this great chance to win a big pot.

By accepting the presence of fear, we can eliminate, over time, the physical response we show based on those fears.

The basis of tells in both subliminal and non-subliminal fear leads to the fact that many poker players overestimate danger.  A lot more people are afraid of flying in an airplane than they are of riding in a car but the odds are a lot greater for the possibility of death or injury whilst riding in a car than in flying.