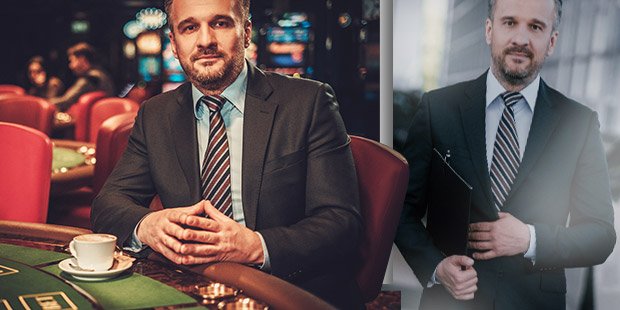 The world is fiercely competitive.  Poker players feel the competition all the time.  The same is true for people in business.  Many books and articles have been written recently about what makes a person successful either in business or in poker.

At first glance, you might not feel that businesspeople and poker players have many things in common.  Recent studies show that highly successful people across many pursuits, careers, or professions have very similar characteristics.

So, let’s look at some of the characteristics that poker players and businesspeople share.

Bill Gates made an advert for television many years ago.  The advert was quite short and very direct.  He spoke about his company’s commitment to continue to make great software with these words “it’s our passion”.  It really doesn’t matter if you like his products or not.  When he wanted to speak to the world community, he spoke about passion.

The second example was also an advert for television.  A donut shop owner was awakened by his alarm clock at the ungodly hour of 4:00 am.  He groggily got out of bed mumbling to himself, “gotta make the donuts”.

Poker players need to be committed to the game.  Every hand is the same yet every hand is different.  Dedication and passion are the emotional driving forces that allow the top players to see differences in hands where others cannot see them.

Commitment also refers to motivation.  It’s easy to talk about being self-motivated but it is very difficult to actually live up to the talk.  Sam Walton, the founder of the great company Walmart, said that his executives had to work on Saturday.  It was part of their commitment and dedication to the company and demonstrated their motivation to continually strive for excellence.

Good poker players have to be prepared to study hand after hand so that when they face a similar situation they can make the most learned decision possible.

It wasn’t by accident that Donald Trump called his book “The Art of the Deal”.  He meant that every agreement we make is a deal, of sorts, and that getting the best deal is an art form.

In poker, we need to understand all the most recent statistical tools modern players use to determine the efficacy of calling, raising, or folding.  Poker players continue to learn that there is a vast difference in their ultimate bottom line between calling and raising and how much to raise to get the opponents to stay in the hand.

Businesspeople have to be able to negotiate.  In poker, a negotiation also takes place when a player has to decide hope to proceed in the hand.  Every bet is part of the negotiation for that hand.  Really good poker players might make a play in a hand hoping to be able to use that play as a precedent for trapping an opponent on a subsequent hand.

Both good businesspeople and good poker players know that a negotiation may take place over a long period of time.  One of the lessons we might learn from Donald Trump is that as the stakes get higher the negotiations for the deal take longer to complete.

The great American novelist, Ernest Hemingway, said that the key to great fiction writing was first to define the characters and decide on the story.  Then the writer has to put in everything he knows about people.  In every poker session, the better players will use everything they know about people.

In business, this is called networking.  The skill in understanding people is the same across many professions.  We talk about a doctor’s bedside manner and about a clergyman’s ability to soothe his or her congregants in moments of crisis.

Poker players never face such levels of crisis in a poker hand but money is still money.  Knowing the most you can know about an opponent can save or win large sums of money.

Open-mindedness is a major component of flexibility.  We see in YouTube videos of poker players, even famous ones, who are shocked at how an amateur bet on a hand.   In the worst case scenario, the poker pro may call out the amateur as an idiot although the amateur could not be faulted for misunderstanding a hand that he ended up winning.  The pro called out the amateur because the pro lacked the flexibility to alter his analysis of the hand based on the opponent’s skill level.

At some level, everything we do is a risk.  In business and in poker there may be a lot of money at stake.  But ultimately both the poker player and the businessperson have to take a risk.  In the case of business, we might not know the final result of a decision taken today for many years to come.  In poker, we will soon find out what the results of our decision were but that doesn’t mitigate the risk factor.

People at high levels in any profession including poker and business share many traits that taken together combine to create a person who can excel at his or her chosen calling.