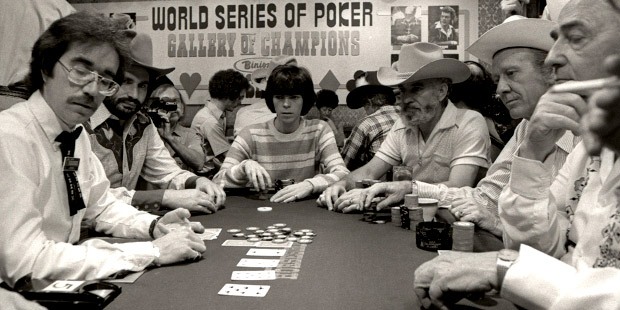 The rise and downfall of Stu Ungur, who many people still consider to have been the best poker player of all time, has resurfaced as some online poker documentaries feature his story.

The Stu Ungur Legacy: Winning is not the Only Thing

Stu Ungur may be the poster child for the pitfalls that can strike any poker player.  It doesn’t matter if a player plays poker online or at a land-based casino.  The pitfalls are strikingly similar.

Stu Ungur might have become a world famous mathematician had it not been for the fact that his father ran a bar in New York City’s Lower East Side and was an illegal bookmaker and loan shark “on the side”.  Stu Ungur was born in the 1950’s which meant that his father had been born and grew up in the Depression era.

The Depression took a large toll on everyone who lived through it and Ungur’s father was no different.  He was likely a first generation American to immigrant Jewish parents.  Jewish immigrants from Eastern Europe had fled widespread anti-Semitism as well as grinding poverty and they found great opportunity in the United States both legal and illegal.

Ungur started by playing gin rummy.  He was so good at it and could win so much money playing rummy that he dropped out of school when he was only in the 10th grade in order to play rummy full time.  By the time he was thirteen, Ungur had developed the reputation as one of the best gin rummy players in New York.

When Ungur was thirteen his father died of a heart attack and his mother was virtually out of the picture because of the lingering effects of a stroke.  Thus, thirteen year old Stu Ungur started making the rounds of the New York City gambling scene circa 1967.

Anyone who shows high poker skill at a young age may find himself or herself hobnobbing with unsavory characters.   There are many more land-based casinos today than there were a generation ago.  Online casinos and poker rooms afford important anonymity and are therefore safer for young poker players.

We aren’t talking about thirteen-year-old gambling geniuses. Rather, we are talking about college-age players who are safer playing online rather than at land-based poker rooms.

Ungur was befriended by an underworld figure who introduced him to poker.  The lack of a guiding influence from parents was probably a major element in the arrogance Ungur showed at the poker table.  He frequently denigrated opponents and exuded arrogance that went far beyond supreme self-confidence.

In the immortal saying, pride goeth before the fall.

The only way to criticize an online opponent is through the chat room or a forum.  Online casinos are very reluctant to allow abusive comments in their chat rooms and forums likewise monitor the level of discourse there.

In this sense, among many others, it is a lot healthier for young poker players to get their start at an online casino.

Although Ungur was profoundly adept at card games, he was less adept at handicapping horse races and ran up a sizable debt on horse racing bets.  He fled to Miami where he played rummy against all challengers and won.

He then began counting cards at blackjack and actually caused the demise of single-shoe blackjack since he could remember every card played and every card still in the shoe.

Ungur was banned from playing blackjack at several casinos.  His arrogance was as famous as his great memory and card skills.

As good as he was at poker, the arrogance with which he approached all games and all opponents remained.  One of the things we always reiterate at Everygame Poker is that gambling games have to be fun before all else.  That means gambling within your financial means, treating all opponents with their due respect, and accepting with equanimity that there will be good days and less good days.

Ungur famously said once that he never was nor could he ever be a good loser.  In his mind, a good loser was just a loser.

Getting Ahead of Oneself

Ungur was so good at every card game he played that it was almost inevitable that he would enter and win the World Series of Poker.  He did so in 1980 and repeated in 1981.

The danger of having tremendous success without the support of family to tone oneself down is that a plyer, whether in poker or any other sport, begins to feel indestructible.

For Ungur, this meant dabbling in hard drugs at first until the drugs became such a severe habit that he had to play poker to win enough money to support the habit.

His cocaine habit led to extremely erratic behavior including abusing the dealer at a Las Vegas casino after Ungur lost a big pot.  The casino banned Ungur but the owner’s son interceded and reinstated him.

He also thought himself so intelligent that he could win betting at any games including games that be knew little about and could not control through his massive intelligence.

He developed two addictions: drugs and gambling.  For any poker player no matter their skill level at poker, it is absolutely, vitally important to stay within themselves.  Never trust your body to endure drug abuse as if your body is not like everyone else’s body and never assume that you are smarter than everyone in every matter.

Ungur lost all of his winnings from his Worlds Series of Poker win in 1987 in just a few months and died a few months later.

The lesson of Stu Ungur’s life is that we need to keep everything in perspective including our own great skill.  We need the support of family and friends.  We need to stay emotionally balanced.  Sports have a way of upsetting the delicate balance people need to lead happy lives.

For poker players it is no different.  See poker as a game.  Play for high stakes only if you can afford to do so and are emotionally sound in managing your money.  If you are like most poker players, you’ll never enter the Worlds Series of Poker.  Instead, you can have many hours of great fun playing poker at Everygame Poker.