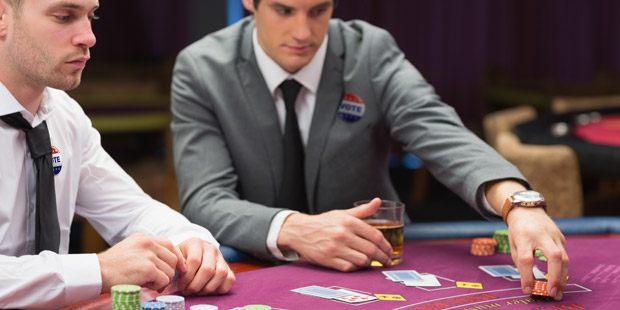 We talk often about the complexity of poker.  It is extremely educational to compare some of the skills great poker players have and similar skills great politicians or political negotiators have.  It is also a fascinating side of modern poker that some skills that are needed at a live poker table are very different when you play poker online.

The famed American author of the 19th century, Jack London, wrote extraordinarily realistic stories about coping with harsh conditions.  He also spoke about life in general by using poker as a metaphor for the challenges we all face in our lives.  Poker during his lifetime was just getting started as a popular card game.   Bluffing was in its infancy as a “science”.   London said, “Life is not always a matter of holding good cards, but sometimes, playing a poor hand well.”

Richard Nixon was the only American President to resign from office.  He did so in 1974 while a scandal swirled about his administration.  However, Nixon had a long career in politics and he implemented policies that surprised most people, both his supporters and his detractors.  He may have developed skills playing poker in the Army during Worlds War II that helped him in his political career.

One tactic that Nixon used in poker was to attack when other players retreated.  If Nixon were playing online poker today, he might be considered a very aggressive player.   As President, Nixon opened relations with Communist China and was the first President to offer a “reset” in relations with the Soviet Union.

It might be that Nixon set in motion the long downward spiral of the Soviet Union which resulted in its collapse in 1989.  He may also have begun the process by which Communist China opened its economy to market forces in the last years of the 20th century.

This may all have come about from a high-stakes bluff with worldwide ramifications.

Not only was that a gaffe of historical proportions but Jimmy Carter didn’t pounce on him.  He simply let it go.

Ronald Reagan, on the other hand, knew how to pounce and how to do it in a disarming manner.  Reagan’s best trait that he might have learned playing poker in the American Midwest was timing.  He honed his timing expertise as an actor.  Reagan was never an A-list actor.  He proved the old adage that you don’t have to be the absolute best to succeed at poker or in business or in politics.

President Clinton may have been the most poker-savvy politician of our era.  He endured scandal after scandal from his time as Governor of Arkansas to his eight years as President.

His greatest quality was simply being able to move on.  There is a famous clip of him being asked a pointed question as he walked away from the cameras as the Monica Lewinsky scandal first broke into the national news.  A reporter asked him if he would resign.  He turned to the reporter and made a facial expression that said “are you crazy?”

Bill Clinton never let a crisis gnaw at him.  He was totally in control of his emotions at all times.  The best poker players have the same skill; they don’t let the frustration of a bad beat or a run of bad luck get to them.   Bill Clinton’s control contrasts sharply with the overly emotional side of his wife, Hillary Clinton, who may have lost the election in 2016 simply because she allowed setbacks to overwhelm her.

In the poker world, Phil Helmuth may be the most famous player who loses control especially over bad beat by an amateur.  Helmuth remains one of the best players in the world but we can speculate that he would be a lot better if he smiled through his losses.

Articulation is a major aspect of bluffing.  A poker player needs to be able to communicate the falsehood that he or she has a strong hand.  The best at this may be Tom Dwan who would probably make a great negotiator on a world stage.

As much as President Obama set in motion the conflicts that roil American politics today, he is seen by supporters and detractors as a relatively weak President.  He needed the unflagging support of the news media to avoid being seen as a weak President.

President Obama gave Hillary Clinton the position of Secretary of State which led to her email scandal which he was unable to quiet down.  It might be that President Obama’s weaknesses led directly to the stunning defeat of the Democratic Party in the election of 2016.

The lesson for poker players is to be willing to fold a hand at any stage, even when you have already put in a sizable number of chips.  In the language of American gambling, it is a big mistake to “throw good money after bad”.  President Obama, in a sense, “threw” Hillary Clinton into a position for which her personality wasn’t capable of handling.  By giving her the recognition that she got from her position as Secretary of State, Obama smoothed the way for Hillary Clinton to become her party’s candidate in 2016 and to lose in such dramatic fashion.

We will conclude with a short salute to possibly the best poker player amongst American Presidents, Donald Trump.  He simply flouted all conventions to win the Republican Party nomination.  He then defeated Hillary Clinton in an election that very few saw could go his way.

Trump’s greatest asset as a “poker President” is that he knew from the outset that he couldn’t win as a nice guy.  He fought hard against every attacker.  He was crude at times.  He insulted people.  But he stayed with a very short list of positions.  These positions resonated with tens of millions of voters and, in the end, they were the decisive factor in his win.

The poker lesson is to never follow the “book”.  If you find yourself following the book, you need to change your tactics because your opponents will see through your bluffs and will fold when you have a good hand.