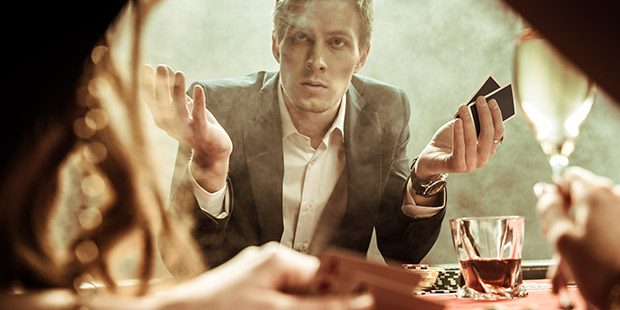 Online poker is growing by leaps and bounds because it affords players the chance to play several games against many different types of opponents from all over the world.  At any given moment there are thousands of players at online poker rooms such as Everygame Poker.  You could never have a pool of players that large at a land-based poker room.

When you play poker online, you can’t see your opponents so you have to find an edge in other ways.  Similarly, as we said above, over time you may play against hundreds or even thousands of individual players.  In addition to the large number of potential opponents, online poker draws in many new players.

You can spot these players quickly as they tend to fold with marginal hands.  You need to see what they actually stay in a pot with but it generally doesn’t take much time to figure them out.  Quick folders may be playing with a short stack or they may be so new to poker that they are feeling the game out.

The latter type of quick folder may be extremely observant and a fast learner and may have the potential to become a very good player.  You need to take advantage of such players before they get the experience they need to beat you regularly.

The best way to take advantage of these players is by bluffing.  You also have to be aware of the other players in the game but when the quick folder is the only one left in a pot, the best ploy is to make a huge bluff.  You may be in a game with more than one quick folder.  This is the type of game where you need to pounce.

This is the very opposite of the quick folders and new players usually are the most extreme non-folders.   One reason why it’s so important to observe the outcome of every hand is because even when you are no longer in a hand, you can observe the non-folders at the table and use that knowledge for later advantage.

Once you have identified a player as a non-folder, you have to understand that bluffing is no longer a sound strategy move on your part.  Non-folders simply don’t read bluffs.  They stay in pots hoping to get the card they need and as a result lose a lot of hands. They also get lucky and win hands that they should have lost.

That’s expected in poker but hoping to scare them out of a pot by bluffing won’t work since they won’t understand that you’re bluffing.

Every non-folder has a tipping point at which they will fold a hand.  This point is always much higher for a non-folder than it is for better players.  So, you need to observe where the non-folder at your table has established his or her tipping point and always be sure to bet under that point.

These are similar to non-folders with the added aspect that they like to raise when their hand doesn’t justify aggressive betting.  Many such players watch a lot of poker on YouTube and think that they can emulate the pros who may raise aggressively with poor cards.

They don’t understand that the clip they are watching is actually an isolated case.  Most often, the same pro will fold a poor hand.  Sometimes they stay in a pot as a tactical ploy so that their opponents can’t read them well.  The raiser thinks that aggressive raising is the key to poker success.

There is a great tool you can use to detect these players and by using this device, you’ll improve your game in general.  The trick is to analyze both your hand and your opponent’s hand.  When you do this, you compare your range against what you understand to be your opponent’s range.

Newer players and a lot of relatively experienced players never try to analyze their opponent’s hand.  They rely on their own hand and what card or cards they need to win the hand.  For new players, the main reason they concentrate so much on their own hand is because they haven’t developed poker memory.

Poker memory is what the best pros use to get deeper into a hand than any amateur could.  They remember previous hands, how the opponent bet, in which position he or she bet from, and what their hand was in the end.  New poker players in a live poker room will look at their cards often; they have trouble remembering the value and suit of the two cards in the hole.

When you play poker online, you can’t see this and in fact the players don’t have to turn over their cards to remember what they have.  Still, a player who seems unable to analyze a hand deeply will either call with nothing or fold with something worth keeping, and will have little concept of position.

These are just a few of the many tendencies that poker players have.  By looking closely at every hand, you’ll improve your analytical skills and will be able to more quickly and decisively detect the major flaws in your opponents’ game.