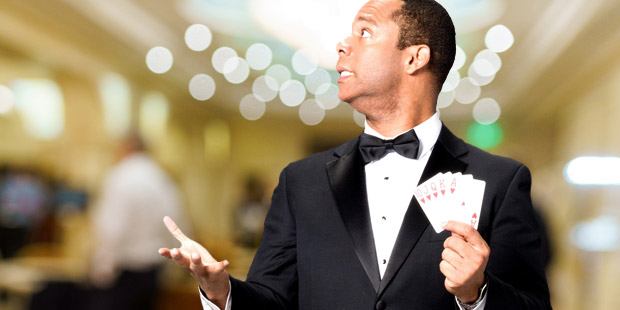 Poker is only about 150 years old but in that short time, it has developed a language of its own!   Poker online and poker on land have their own jargon.  There are also many terms that overlap online poker and land-based poker.  In this article, we’ll go over some useful poker terms that confuse many new players.

We have chosen these terms because they seem to be the ones that in particular new players get confused by.  We have avoided all of the mathematical terms since they are far too complex to define and describe in a short article.

This obviously means that the player is risking all his chips.  However, if the opponents have more chips than the bettor, they don’t have to go all in; they merely have to call (guess we need to define this too!).

This term is pure jargon.  It means every stop in which betting is allowed.  Pre-flop (hhmm - we need to define this too...) is called first street, after the flop is second street.  These are easy to remember.  The sixth card dealt is called the turn and the last card is the river.  Some players use a horse racing reference to remember the sequence. In horse racing, the turn comes just before the stretch.

This is a tournament term.  It refers to the point in the tournament where there are just a few players who can be defeated and not win any money.  Most players feel that losing in the early going is far better than losing when in the bubble.

This is a powerfully pejorative term to new players but is just a mild descriptive term to experienced players.  It simply means calling in pre-flop betting.  It may indicate a poor hand that the player wants to keep to see an inexpensive flop.  It might be a trick to make it appear that the player has a poor hand in order to trap opponents later on.

In games with community cards, there are usually blinds.  The big blind puts in a sum double what the small blind puts in.  This is a type of community ante.  In order to stay in the hand before the flop, a player has to at least call the big blind.

In tournaments the size of the blinds goes up dramatically as the tournament continues.  At some point, a player with a short stack will be said to have a given number of big blinds.  That means that the player can play extremely tight on all hands except the hands in which he or she is a blind.

This is one of the most misunderstood terms to new players.  In a game with community cards, there will be a high card after the flop and thenceforward.  Top pair simply means that a player has a pair with one of his hole cards and the highest card on the table.  The term does not mean the highest pair available since top pair could be a pair of fours!

When top pair is also a high pair, it is considered strong if the opponents have not bet in a way that we would expect them to bet with a higher pair in the hole.

This is primarily an action that a player in early position makes when no one has bet before them.  It might telegraph some weakness but the strategy of check-raise is so common that it may be impossible to know what a check really means.

This term means that the player cannot win but is ostensibly still in the pot.  It often happens when two players have string hands.  The player with the less strong hand may be drawing dead but not know it.  This is often the case when the opponent with the higher hand plays as if he were playing with a borderline hand.

This is the card that often decides the winner in a hand.  These types of hands are rarely shown on YouTube so new players often don’t realize the importance of a kicker.  You and your opponent might both have a pair of aces.  The winner is the player with the next highest card which is the kicker.  If you both have a small pair, the kicker still begins from ace downward.

Well...as we see, there are LOTS of new poker terms to learn.  We will come back to the theme of poker terms that new players confuse in another article soon.