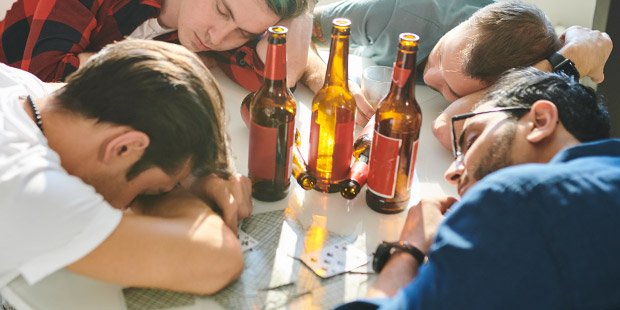 If there is one thing that all poker players have to face at some time or another, it is the “ready availability” of tilt.  This means that poker can drive you crazy quite easily if you let it, so don’t you let it!  Poker can drive you mad whether you play poker online or on land.

We all have our own ways of staying calm when under duress.  Some people eat and some drink.  Neither of these methods is appropriate for poker players.  Some people go out for a walk and some simply go to sleep.  Online poker players can get up and go for a walk but, if you just want to take a break while staying in the game, that will have consequences especially when you become one of the blinds.

It isn’t just poker players who need to develop the skill to avoid tilt.  A salesperson who loses a big sale at the end needs the same skill.  Parents need this skill on a daily basis as do teachers, babysitters, and anyone else who deals with kids!   We know all too well how driving can produce tilt.  It also happens to passengers especially in close quarters such as on airplanes.

So, although we all need to be able to keep our composure, poker has a way of demanding these skills more often than we might like.  One of the things that make poker so great is that it challenges our calming reserves as much as it challenges our skill in any given hand.  Here are some tried and true ways to maintain composure during a long losing streak or after an especially onerous bad beat.

It’s Only a Game

A famous American football coach, Bill Cowher of the Pittsburgh Steelers, was commiserating with his young daughter who was crying after the Steelers lost an important game.  He leaned over and told her, “You can’t win them all”.  This may be the most expressive example of maintaining composure.

Even in a championship poker tournament, it’s only a game.  You can be as “happy” for your opponents’ good fortune and skill as upset over your bad luck or strategic error.  Every hand can be a learning experience.  Especially in tournament play, where people continue playing for very long stretches of time, a mistake or a bad beat at any stage of the tournament can come in handy later on if you let it teach you.

Going on tilt makes it impossible to learn from hard experience.

What are You Afraid Of?

This is a corollary of the first item but it deserves its own full exposition.  We often worry about the wrong things.  Worry puts powerful chemicals into our blood stream so it’s important to control our fears.

In short, if poker is just game, there is really no need to worry excessively about it.  We should worry instead about staying within our means at the poker table and in every other way.  We should worry about making reasoned decisions.  If we do those things, then anytime we lose is just part of the game and we have already “budgeted” for such a development.

You can talk with your spouse or partner, with other poker players, with a close friend, or with another close family member.  In a famous Playboy interview from the 1970’s Karl Hess, a right-winger turned new leftist said that when a person needs help he should turn to his neighbors rather than to a distant government.

In other words, there are many people we can talk to about the emotional side of poker. Seek them out and spill....

It is impossible to play a high-level game like poker without emotion.  It is important to be sure that emotion is not all consuming.  Maintaining a proper kevel of emotion is vital whereas trying to suppress our emotions can backfire and do more damage in the long run.  Poker players who suppress their emotions often suffer a far more damaging tilt after a less than severe loss.

Some parents have a term for when very young kids break out in tears over “nothing”.  They call this the “paper cup syndrome” in which something as insignificant as an empty paper cup falling on their tiny feet throws a child into uncontrollable wailing.  Poker players are also subject to a form of paper cup syndrome.  It is best to let off a little steam from time to time rather than store up a lava load of tilt for a later moment.

Understand the Essence of Tilt

Tilt is not a one-dimensional phenomenon.  It is actually far more complex.  There is a physical aspect that shows up in clearly observable actions.  These may elicit a response from an opponent.  If an opponent sees that you are letting your emotions get the better of you, he or she might say something that is designed to further your descent into tilt.  So, it is important not to show your opponents that you are very upset and getting angrier by the second.

Do what we may, our bodies know that we are upset.  We might experience a hormonal flood into our blood stream.  This may require that we take a break but it’s better to simply go with the flow.  Let the adrenaline and other hormones flood our blood stream and play on in as relaxed a manner as possible.

Even as we have two physical reactions to a bad beat or bad luck, an outward reaction and an inward, hormonal reaction, we also have two mental reactions.  The first is the one that we can recognize ourselves.  It involves doubt, fear, anger, and may include a pounding in our head that may be a severe headache or the effects of hyperventilation.  We normally call this an emotional response.

One of the best ways to deal with the sub-conscious response is to make it a conscious response.  Since hyperventilating may be a problem for some players, deep breathing techniques often work well in alleviating the signs of a deeply negative response to the vicissitudes of poker.

Poker is basically a game.  It is a very challenging game but a game nonetheless.  The best way to enjoy the game is to allow bad luck and bad breaks to be and not to overreact to them.