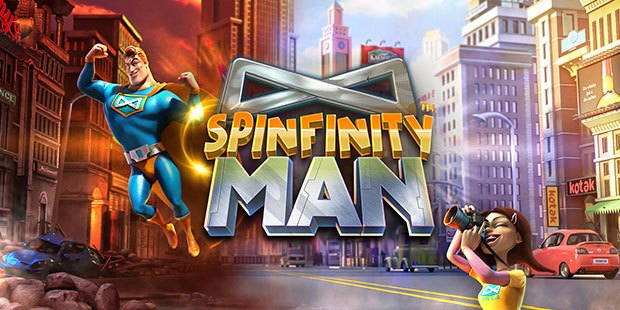 It’s a Bird! No, it’s a plane! No, it’s our new Betsoft slot Spinfinity Man!

A superhero is a benevolent character with superhuman powers, which they use to fight against the forces of Evil. Comics with superheroes and villains have become a part of popular culture, movies like Justice League and The Avengers have made these stories and themes even more popular than they already were. Spinfinity Man aims to bring this awesome theme alive in this amazing slot!

This awesome new slot by Betsoft will bring out your inner hero! Use your full array of superpowers to protect the city, they can be a game-changer. Keep the diabolical Mr. X on the run and if you catch up to him, you have to take him down in an epic boss battle. If the going gets tough then the tough use their secret weapon, the utility belt, and then after a long day of saving the city enjoy the love shown by your favorite fan!

You don’t need to be bitten by a radioactive spider, wield a magic hammer or build an iron suit for your superpowers - you just need the Spinfinity Man symbol! Once this symbol appears on the reels it will activate your superpowers for some super wins! Use your laser eye beams to burn away columns and rows, use your icy breath to blasts clusters of symbols and use your telepathy to remove any single symbol from the reels. With these powers, evil doesn’t stand a chance!

Your arch enemy Mr. X is on the run, but there is no way he can get away from someone moving faster than a speeding bullet! Stay hot on his trail, as the more Mr. X symbols that appear, the closer you will be to catching him and once you do, you will be credited some free spins, but don’t let your guard down, you haven’t won yet! Once you have caught up to Mr. X, it’s time for the boss fight. During this period the Spinfinity Man symbol becomes the Mr. X symbol and he has some devices to make things difficult. He can burn away two rows or columns with his laser arm cannon, watch out for the destruction bomb which can blow up small clusters and his signature weapon, the X-ray, can zap all symbols of a single type on the reels. But evil will never prevail! With every Mr. X symbol that appears you get an additional free spin.

If you ever need a boost in strength you can always turn to your trusty utility belt! Play the always entertaining double-up game and put your winnings and the city in the hands of fate.

After a long day of fighting crime and saving the day, you can’t leave your biggest fans hanging. When you explode 6 clusters in a single spin, you activate the fan girl feature where you trigger extra cascades and random symbols will explode for instant wins.

Crime never pays, but this slot sure does! this awesome game is live!