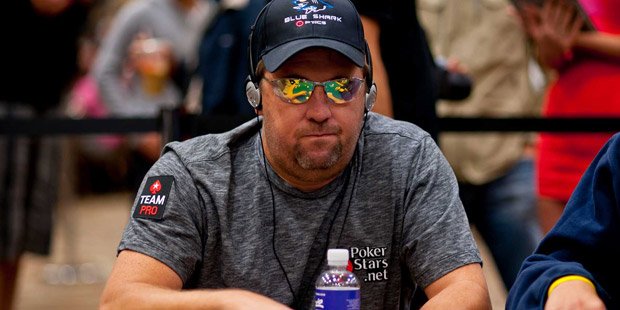 Bluffing is a major part of poker.  Everyone has to bluff at some time and to figure out that an opponent is bluffing sometimes.  But some bluffs are legendary.  Chris Moneymaker started a poker boom with a single bluff that has gone down in history as the Bluff of the Century.

What Made Chris Moneymaker’s Bluff So Important?

We are well into the World Series of Poker 2019 so it is appropriate to revisit the moment the modern era in poker began: Chris Moneymaker’s awesome bluff in the WSOP in 2003.  Chris Moneymaker had qualified for the WSOP by winning an online poker tournament.  He was an unassuming accountant from Atlanta who liked playing poker online.  He probably thought that he had no chance to win the tournament against professional poker players but in round after round and table after table he survived until he was at the final table.

A New Era in Poker

Online poker has simply exploded in popularity since Chris Moneymaker fooled a well-known poker pro in a critical moment when the pro could have called and won the tournament.  Moneymaker was an online poker player with little thought to becoming a poker pro.  But he discovered during the WSOP that year that poker online had taught him many lessons and that he had many of the qualities of successful poker pros.

One of the most often expressed “criticisms” of online poker is that it doesn’t teach players how to cover their tells.  Chris Moneymaker proved them wrong then and they are wrong on that score today as well.  Playing poker online trains players in every facet of poker.

Poker pros know that tells are not the signal that many people think they are.  A tell has to be extremely overt to be useful especially in a tournament and especially at the final table in head-to-head competition.  Chris Moneymaker proved to have steelier nerves than Sam Farha and that was the reason he won the WSOP and started the poker boom.

In head-to-head competition, both players are a blind.  Position means far less than it does when the table is full.  But position played a major role in The Bluff since Sam Farha checked a weak pair and Chris Moneymaker jumped in with what has been called the buff of the century.

Neither player had a good hand pre-flop but, at that stage of the tournament, weak hands can become strong hands.  There is only one other hand to best.  Moneymaker had the better hand with a king but Farha flopped a pair of nines which, on that hand, was top pair.

After the river came out, Farha didn’t think long before checking.  This was a clear error on his part and Moneymaker read it perfectly.  Even if Sammy Farha had checked but had taken more time to think about it, Moneymaker might not have gone all-in.

When Moneymaker went all-in there was a palpable indrawing of air from the audience and the on-air announcers immediately realized that the tournament itself was on the line.  Their excitement was palpable.  Then Sammy Farha had to decide his course of action.

Two Minutes to a Decision

When Chris Moneymaker went all-in after the river, he knew that he could get Farha to fold if he thought Moneymaker had a relatively weak pair that would still beat his pair of nines.

Farha looked off into the distance and played with his chips.  He played with them fiercely, not in the lackadaisical and habitual manner that poker players generally do but in a ferocious manner indicating severe doubt.

Moneymaker demonstrated that even though he was just an “online poker player” he knew how to sit still and show nothing.  Through his tinted glasses he looked directly at Farha.  This ploy added to the intimidation factor.  In the ensuing years, people have come to realize that simply staring at a point is less effective in selling a bluff as looking directly but impassively at one’s opponent.

What Was Sam Thinking?

We can only imagine what was going through Sam Farha’s mind.  “He knows that I know that he knows….”  Quickly Sam Farha was reduced to a mental coin flip; he simply had no solid read on Moneymaker’s hand.  Would Moneymaker risk the entire tournament on a lesser pair?

We might presume that Farha never considered that Moneymaker was bluffing with a high card.

To Be or Not To Be

Farha was clearly in a major quandary.  At first he seemed to be disconnected from the obligation to decide call or fold.  He fidgeted in his seat.  He looked at Moneymaker with a slight smile on his face hoping to elicit a response that could direct his next action but Moneymaker simply stared at him and didn’t change his expression in any way.

Farha leaned back in his chair.  He scratched his neck and fidgeted with his belt.  The greatness of the bluff was that Moneymaker knew that Farha could have no more than a pair of nines and would not risk the entire tournament on such a weak hand when Moneymaker could easily have a pair of tens.

So, after thinking for a short time, Sam Farha folded.

It is clear that many factors had to come into play for Chris Moneymaker to be able to make this immortal bluff.

The Rest is History

Chris Moneymaker set in motion the great poker boom of the 21st century by winning the WSOP in 2003.  Online poker is in its Golden Age which may last for decades more.  The WSOP is now nearly as popular as its name-sake, the World Series of Baseball in the United States.

Poker players watch the WSOP live and on film for clues as to how to read hands and improve their game.  And it is all due to a great tournament by an unknown, chubby, unassuming accountant 16 years ago!