Hold onto Your Day Job for Now 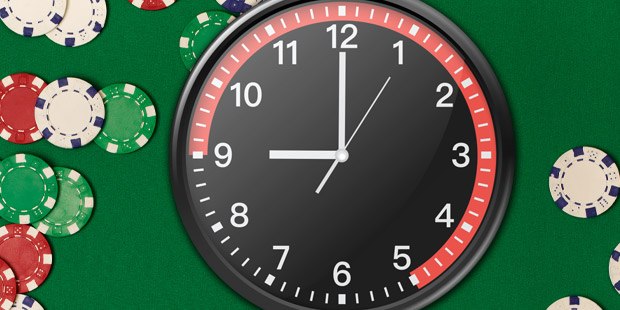 In most countries, little boys, and increasingly many little girls, dream about becoming star athletes.  American kids fantasize about hitting a home run in the World Series or leading their team to a Super Bowl win.  For the massively overwhelming majority, it’s best to work towards getting and holding a good “day job”.

Poker Players Run the Gamut from Amateur to Pro

How many poker players can legitimately dream about becoming poker pros? Did Phil Hellmuth, the kid, dream of becoming a poker pro? Phil Ivey? Did Daniel Negreanu grow up knowing he'd be a pro with his own very successful YouTube channel?  Not likely that any of them grew up imagining their careers as playing in huge poker tournaments in Las Vegas.

Although the percentage is a lot higher for poker than it is for football or other physical sports, the numbers are still small.  What can we learn from true poker pros that will shed important light on the hope of an amateur poker player to become a pro?

A college student in the 1970’s told his friend that he was working toward having a career playing chess.  His friend asked what that meant.  The chess playing friend said that it meant giving up on his social life!

Poker pros do not have to give up on their social life but they do have to make dramatic and important sacrifices to reach the level of the pros.  Today’s pros don’t play poker by instinct or by hunch.  Just as in baseball, where an entire field of statistics has grown up in the last three or four decades and has proven its ability to win games, so it is in poker where the proven value of mathematics has taken most of the hunches out of the game.

Since most people are not math wizards, it takes a lot of work to be able to go through all the variables that will help you decide how to proceed in this hand.  Then you do it again on the next hand!

The first lesson the pros teach us is that they never stop studying and learning.

In the entertainment business, in New York and California especially, people are told again and again to keep their day job.  In many cases, the day job is waiting on tables whilst they wait for an acting break.

We don’t suggest that you fall in love with waiting on tables.  The key is that most aspiring actors work hard at their craft in their off hours but they still report for work on tine for their next shift.

A lot of poker players who aspire to becoming pros have better jobs than waiting on tables.  Becoming a poker pro is something that usually happens to a person a little later in life than when they aspire to movie or television stardom.  It is not a trivial question to ask if your regular job doesn’t hold more potential for growth and financial success than becoming a poker pro.  After all, Chris Moneymaker was an accountant.

It isn’t enough to stay with your regular job.  You should see it as a steppingstone to success.  In his great book “Up the Organization” which Robert Townshend wrote in the 1960’s after he had made the Avis Car Rental Company much stronger and much more successful, he wrote about a taxi driver he became acquainted with.

Townshend asked the driver if he could schedule a regular ride with him.  This took the driver aback since he had never thought of actually scheduling rides before.  Townshend taught the driver to see himself as a businessman.  The driver became enormously successful by filling his days with regularly scheduled rides.

Value the Time between Poker Games

Stu Ungar was a poker genius.  He was also a drug addict and a failed husband and father.  Stu Ungar never found a way to fill the time between his forays into gambling.

Your day job is the way to keep yourself healthily occupied whilst you wait for the next big game.  Your day job affords you the opportunity to maintain friendships and collegiate relationships with many people that you can learn a lot from.  Don’t think that you can learn about poker only from other poker players; you can learn many lessons that are useful in poker from people in many walks of life.

The taxi driver who Robert Townshend mentored learned as much from his passengers as he might have learned in a university course.  When you drive the same person many times, you develop a relationship with them.

The great American novelist, Ernest Hemingway, described the art of writing a novel.  To paraphrase him, he said to work out the story and the plot and then to put in everything you know about people!

Who can you learn anything about people from except other people?

So, you don’t have to love your present job but you should have a job until you are absolutely sure that you can support yourself playing poker.

There is an undeniable sense of communion amongst poker players.  However, many poker players seem to think that great camaraderie is not possible in regular jobs.  This is not the case.

There is an apocryphal story about a young insurance salesman who lived near Lake Michigan in Chicago and whose business office was in the far northwestern corner of the Chicago metropolitan area.  The office manager scheduled the annual Christmas party and the young, new salesman didn’t show up.  The manager called him and asked, “Why aren’t you here?”  The salesman replied that there was a blizzard going on where he lived.  The manager told him to come to the party.

So the salesman went to the party.  By the time he had driven a few miles away from the lake, the sun was shining brightly.  That story reflects the importance of camaraderie, even in an insurance office!

Another story from Chicago will demonstrate again the importance of keeping your job for the connections you’ll make even if the job itself is not what you would like to do for the long term.  The men and women who sell beer and other food and drinks at sporting events in Chicago are a tightknit group.

Recognizing this, a small publisher authorized publication of a small book about Wrigley Field vendors.  The book runs about 100 pages most of which are taken up by amateur pictures taken by one of the authors.  The writing is also less Hemingway and more pulp fiction.  The book was a minor success since so many people in Chicago “know” the vendors from seeing them game after game at Wrigley Field.

And on page after page the feeling that vendors, at least in Chicago, are a group of friends who care for each other comes through.

Your regular job is a lot more valuable than you might have thought.  Stay with it and turn pro only when it is absolutely and demonstrably the best way to go!

But in the meantime, play poker often - online and with friends - and develope your skills.  One of the most important being to read the other players at your table.  And that skill you can learn while in any job.