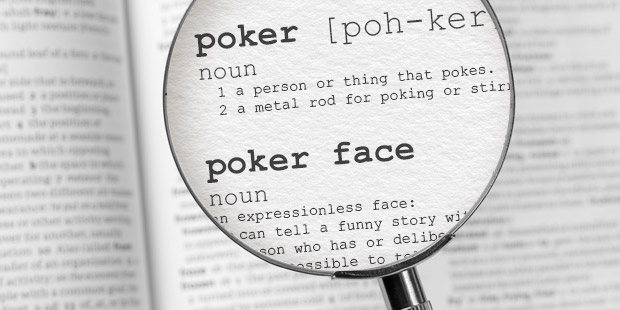 The language of poker is so rich that we use many poker or other gambling terms in everyday speech.  At Everygame Poker, we are as interested in the language of poker as we are in the minutiae of how to play poker.  This is the second article that explains how different poker terms have entered the English language.

Play at Everygame Poker and Look Up Strange New Terms

This word is technically called a phrasal verb because it attaches a preposition to the verb “ante”.  In verbs like this, the addition of the preposition usually changes the meaning and intention of the verb.

This is so common in English that no dictionary can keep up with all of the phrasal verbs that enter the language.  In fact, every English-speaking country has its own set of such verbs which dare not be used in other countries.

An ante is simply the money you put in the pot before the dealer deals the cards.  It is about as benign as a verb as can be.  To ante up is a very strong verb.  It is more of an order than a request.  If you think someone owes you money or owes a group some money and they are reluctant to pay, you might tell them to ante up.

Then they know that you really mean business!

In poker, this simply means to win a hand by getting very lucky either on the river or on both the turn and the river.  Poker has other terms that express the same idea.

When you back into something financial in real life it means that you benefited from someone else’s loss.  This also applies to sports where one team reaches the playoffs because another team lost its last game.

To back into a deal can also mean simply to accept the deal without needing to negotiate hard for it.  For instance, if someone is selling their possessions because they are moving far away and are on a tight time schedule, you might back into owning a late model car since the sellers had to sell it for a lot less than it was really worth.

In poker terms, this means calling in a hand when people have bet or raised before you.  This is a sales term in business which means calling a prospective client without arranging a meeting in advance.

It is a common way that some salespeople, especially insurance salespeople, reach new clients: they simply call every number in the phone book until they get someone interested in setting up a meeting.

This is another phrasal verb that has a meaning completely different than the meaning of the verb itself.  In poker, to hold out is to cheat by taking a card from the deck and holding it in such a way that a naïve opponent doesn’t know that you have it.

In modern sports jargon, to hold out means to refuse to sign a new playing contract as a move to get a higher salary in the end.  In business, the term may mean to wait patiently for the other side in a negotiation to make a better offer.

In both the sports sense and in the business sense, to hold out is a kind of bluff.  In poker, you can bluff because your opponents don’t know what your hole cards are.  In sports or business, the bluff is more overt since everyone knows that you want to make the deal.

In that sense, a holdout is actually a mutual bluff in which one side caves first.

In the spirit of the holdout, we present the term “lowball”.   In poker, it simply means reversing the order of the hands so that ace-two-three-four-six unsuited is the best hand.  In negotiations, to lowball is to make an offer that is almost insultingly low.

However, in some cultures, the seller expects a lowball offer from a prospective customer.  The seller begins the negotiation with a ridiculously high asking price.  If the prospective buyer counters with any offer, no matter how lowball it might be, the seller knows that he or she has closed the sale.  The only thing to be determined is the final price!

This poker term refers to weaknesses in a player’s game.  In other contexts, people might say that they need to fix “the hole” in their game or performance.  For example, a salesperson may be great at setting up appointments and explaining the value of the product but may have a serious “hole” in not being good at closing the sale.

The poker term entered common everyday English from politics where information is either leaked to the public through the press on purpose or as an act of sabotage against the political side that would rather have the information not go public.

This term refers to a raise or a re-raise for a substantial sum of money.  It is usually found in no limit games since the amount that can be raised in limit games is generally by definition not over the top.

In everyday language, to be over the top means to be a bit crazy.  There is an apocryphal story told to new salespeople at a well-known insurance company.  A new salesman had a meeting with his sales manager two days after he was hired.  The sales manager asked him if he had made any sales and he answered, “No, but I’m on a first name basis with all the Smiths in the phone book.”  In fact, after he had interrupted one Mr. Smith during dinner, he had the gall or courage to ask Mr. Smith what he was eating for dinner.  That is over the top salesmanship.

The Great Flexibility of English

Teachers and students of English know that it may be the most flexible language in the world.  Flexibility is one of the hallmarks of the best poker players so there is a type of synergy between poker excellence and the fluidity of English.

In a couple of weeks we will conclude this fascinating series on the uses of poker terms in everyday English.