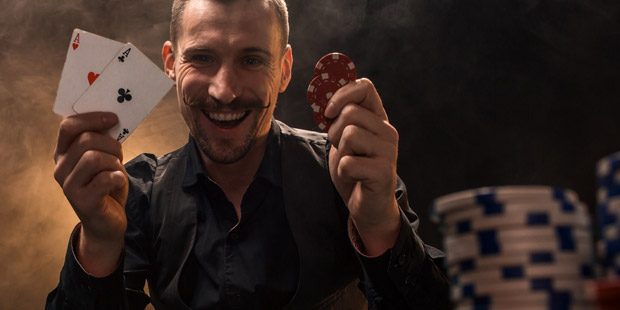 We usually think of tells as little nose scratches, lip curls, sitting upright suddenly or slouching just as suddenly.  These and many others are in-person tells.  Online poker has its own set of tells, too.

One of the many good reasons to play poker online is that poker “tells” are a lot less significant in online poker.  Tells are a form of communication.  Your opponents mostly need to see you in order to read a tell.  When you play online, you don’t telegraph the strength or weakness of your hand as much as you might do when you play against opponents who can see you.

If you are totally new to online poker, you need to get oriented before you enter any games.  First, accept your poker welcome bonus.  Go through all the information we at Everygame Poker provide explaining the many games and tournaments we run.  Most tournaments have a buy-in fee but some are free roll tournaments.

You need to know how big your poker bankroll is to determine which games or tournaments you’ll enter.  As a completely new player, you have made the right decision to play online first at Everygame before you try your hand at poker at land-based poker rooms.

Now you are ready to begin the process of playing without any tells.  Throughout this article, we will assume that the game is Texas Hold’em.

In Texas Hold’em, you should fold about 70% of your hands before the flop.  We know that YouTube is full of games in which one of the pros continued on with a very weak hand.  The reason they can do so is because they are pros.  As a new player, you have a long way to go to reach the point that you can play really poor hands and fool your opponents.

Since you play only about 30% of the hands you get pre-flop, many players quickly call or raise.  This telegraphs that you are so bored by folding so many hands in a row that now that you have a good hand you’re anxious for some action.

Playing too fast is a surefire way to win a lot less money with your playable hands than you should win.

This tell occurs in the later streets for the most part although it can also appear pre-flop.  Slow play is supposed to mean that you are really thinking about your hand and trying to analyze the hand from all angles.  If you think for a long time, and then you either check or call, you are telegraphing either a very strong hand or a very weak hand.

This tell is a corollary to the one above.  If you are a player who does not yet know the mathematical side of poker, you will not be calculating the odds in the present hand.  Pretending to calculate by mumbling terms like “the pot” to imply that are determining the pot odds is a big tell.  Sharp opponents will know that you are telegraphing important information.

These three tells are similar but different as well.  Complaining has to do with bemoaning bad luck.  It might refer to the sharp play from an opponent as if it was unfair of her to win in such a clever way.  A complainer will complain about not getting even one playable hand in a long time.  Complainers rarely leave the game; they just don’t have anything nice to say.

Whining is a tonal way of complaining.  In other words, whining is complaining in the extreme.  Since you are playing online, you only “hear” the tone in the player’s whining by the actual words he or she types into the chat area.

A complainer might write, “I seem to be having really bad luck today again.”  The word “again” is the complaint.  A whiner might say, “I don’t know why I still play this game since I never have any luck.”

The complainer is ripe to lose money since he or she believes that luck is running against them, again.  The whiner is practically begging to give you their money since they know that they shouldn’t still play poker but here they are playing poker!

This is both of the above tells drawn to an extreme.  A player on tilt should never continue playing.  A player on tilt who continues playing is asking to lose more money.  He or she will probably make wild bets in the next few hands until all their money is gone.

The best time to stay in a hand with poor cards before the flop is when one of the opponents is tilting.

Sharp players will note that some players get very quiet when they are losing.  So, the other side of the coin from the last three tells is when a very talkative player suddenly goes quiet.  This is most often a sign of tilt but it might also be a complainer or whiner letting off steam away from the chat room.

Some online poker players believe that there is a direct relationship between a player’s avatar and their skill level.  Pets rate as the worst avatar.  Famous people rank next worse and so on.  If you must use an avatar make it so plain that no one fixates on it as a tell about your seriousness as a poker player.