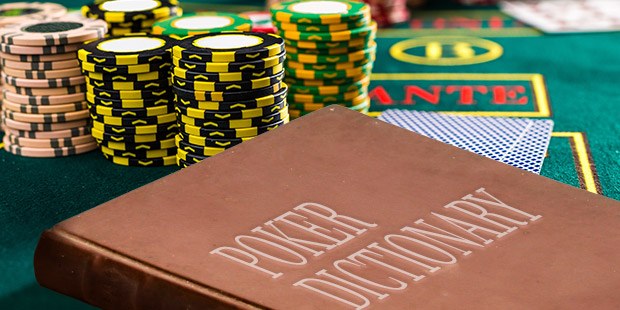 It may be that poker has contributed more words to the English language than any other sport or pastime.  In this third part of our series of terms that English has adapted from poker and other gambling games, we will focus on terms that imply risk-taking.

Poker is a Fountain of English Terms and Phrases

We know that risk is a major aspect of life.  Everyone takes some risks at some time in their lives.  Some people are happy to accept risk while others are generally averse to risk.  English, however, has long found that terms from poker and gambling in general that speak directly to how we all accept risk in our daily lives add a great deal of color and insight to the language.

Here are a few of the poker and gambling terms that speak about risk and that have entered mainstream English.

The term hedge is now used commonly in English.  Hedge funds are monetary funds that invest in solid assets as a way of protecting more speculative investments.  We can say, in poker, that a player who plays conservatively, nurses a short stack, and folds almost any borderline hand before the flop is hedging his bets waiting for a better “investment”.

When Everygame Poker started our online poker site, we didn’t hedge our bets.  We went all-in on becoming the best poker site.  We have demonstrated that playing poker online is both fun and a great way to become a top poker player, one who accepts risk intelligently.

Let the Chips Fall where They May

The philosophy espoused in this phrase is quite the opposite of hedging one’s bets.  Here, the person or poker player is ready to lose it all by accepting a huge amount of risk.  In poker this might be a massive bluff or a borderline all-in bet.

This is clearly not a poker term but it does imply accepting risk.  An investor who chooses not to put some of their money in a hedge fund might very well say that he or she is rolling the dice in a series of risky investments.

This term is a lot stronger in terms of risk than the previous one.  In Russian Roulette, you put one bullet in a gun with six or eight chambers, you spin the chambers, and “shoot yourself in the head”.  This sounds like a very risky thing to do!

Getting back to poker terms, we have the equivalent of going all-in, playing Russian Roulette without the bullet, rolling the dice, and letting the chips fall where they may.  If you lose the farm, your family may have nowhere to live and no source of income.

However, if you win this bet, you will probably be able to sell the farm and retire to the French Riviera or the south of Florida!

Have a Lot Riding On

Then investors started buying futures for profits and let the chips fall where they may!

The investor or poker player who is less risky than others will play the percentages.  The mathematics of poker, so popular these days, is actually a way of playing the percentages and reducing without eliminating the risk factor.

This term implies a lot less risk but not zero risk.  Here we are “playing it safe” by making a bet that is over 90% playing the percentages and very little letting the chips fall where they may.

Now we are in risk-free territory.  When you have the nuts and your opponent has no idea what you could have, you have the chance to make a sure bet.  On election night in 2016, most Americans thought that betting on Hillary Clinton to win the presidency was a sure bet.

That just proved that there are very few sure bets.

On election night, Donald Trump had an outside chance of winning the election.  He filled his inside straight that night.

When the Chips are Down

This term speaks about a situation fraught with danger, uncertainty, and risk.  Yet, the player or the investor still has a chance to win.  The term has come to mean performing in a heroic manner when it looked like all was already lost.

First responders do heroic duty when the chips are down.  If a customer in a restaurant suddenly begins to choke, the restaurant employee, friend of the victim, or bystander who performs the famous Heimlich Maneuver to save the person’s life certainly performed heroically when the chips were down.

This term refers to the attempt by an unscrupulous person to cause blame for a big mistake to fall on someone else even though he or she was to blame for the mistake.  The risk involved here comes from the possibility that the person will be caught attempting to pass the buck.

If that happens, the result is often worse than would have been had they owned up to their mistake in the first place.

Finally, we reach the ultimate in risk.  The showdown is Russian Roulette played by two people at the same time.  The winner lives and the loser dies.  In poker, you simply lay out your cards and the better hand wins.  Even if you get eliminated from the tournament you’re in, there will always be another tournament!