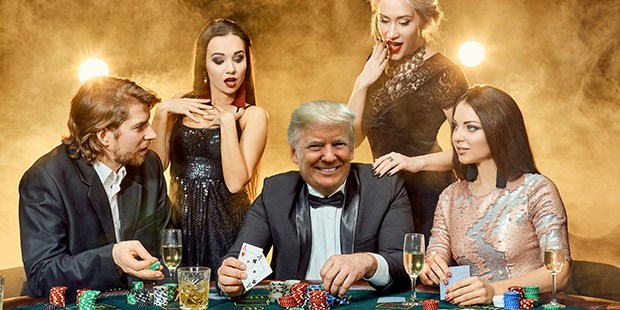 American President Donald Trump recently gave an exclusive interview to reporters from Time Magazine.  The cover of that issue, with President Trump in the Oval Office, went viral on the internet.  It read, “My Entire Life is a Bet”.  That heading and the enormous response it got from supporters and detractors both, prompted us to ask what we as online poker players could learn from Mr. Trump.

Poker Players Have Much to Learn from President Trump

Until he ran for president starting in 2015 and culminating in his astonishing win in November 2016, Donald Trump was not a politician in the sense that we usually associate with that term.  He never had held any elective office.  His life had been in business—negotiating and making deals.

Poker online is a kind of negotiation as well.  We may not make deals per se but we do try to see every bet we and our opponents make as a bid to take the pot.  Online casino rooms also negotiate with us by offering many poker promotions that attract both new and inexperienced players and veteran players to tournaments and simple games.

Regardless of what one’s personal feelings are toward Donald Trump, there is no denying his personal success both in business and in running for the office of President, winning it, and finding many successes in the highly competitive worlds of economics, domestic policy, international trade, and diplomacy.

It seems obvious that we can learn a great deal from Mr. Trump.

Donald Trump announced his candidacy while travelling down an escalator in New York City in early 2015.  His candidacy was considered a joke and a sideshow by all “experienced” observers.  Trump, however, knew something that they didn’t know.

Mr. Trump understood that no amount of levity on the part of politicians and reporters could alter the outcome of an election that was more than 18 months away before he had had the chance to speak to average people.

In poker, we need to understand that one individual pot won’t affect our long term success.  Every pot is important as a pot but no single pot is either a deal maker or a deal breaker.  We can play a hand one way in order to confuse our opponents so that on a future hand they won’t have any idea what we have and will fold to our bluff or will raise against our powerful hand.

Still Playing for the Long Term

One of the main points of the article in Time is that Donald Trump doesn’t know how to run a re-election campaign.  He is looking to win by holding his core supporters and isn’t interested in winning voters who would normally vote for the candidate of the opposition party.

They say that this is an unprecedented gamble.

The end will come in about 16 months.  Donald Trump is gambling that his constituents want him to espouse the same core beliefs that attracted them to him in the first place.

Poker has many similarities to this approach.  There is a core of hands that most players will play.  Anything outside this core we usually fold.  However, just to throw our opponents off we sometimes play a hand that we “shouldn’t” play.

Donald Trump will sometimes appear to be caving into the pressure being applied by his opponents only to double back and change his course seemingly at a whim.  The trick is to make these changes seem like a whim.  In poker, going all in at just the right time is exactly the same.  We want our opponents to think that we are bluffing, betting on a whim.

This is so important to online poker players.  We can’t see our opponents so we have to learn everything we can about them through a kind of poker osmosis.  Ernest Hemingway spoke about this in the context of writing fiction.  He said that a writer had to put in their books everything they knew about people.  This means that we need to observe better than all of our opponents.  Donald Trump proved last time that he is a master at finding an opponent’s weak spot and exploiting it.

Donald Trump may be wrong about who will emerge from the huge field of Democrat Party candidates.  But he will know more about the ultimate winner of the primary campaign than the candidates know about themselves.  He will also use every criticism that the winner’s opponents used against her or him to his own advantage.

In poker, knowing your opponent means paying attention to every hand, not only to the hands you play.  In fact, we fold pre-flop on about 70% of all hands so we need to pay keen attention on all those hands where we folded.  It is the ability to learn from our opponents’ actions now that will determine both how we play a future hand and how we think our opponent is playing her or his hand.

In 2016, Trump took advantage of Hillary Clinton’s many liabilities to win the presidency.  This year, he will focus on the next opponent’s liabilities but he will also be very cognizant of the opponent’s strengths.

The same is true in poker.  We need to exploit our opponents’ weaknesses and we also have to be fully aware of their strengths.  In its own way, this is a lot more difficult in poker than it is in a political campaign.  Trump will face one opponent.  In poker, we might be facing as many as ten opponents on different hands.  We need to change course as the opponents on any given hand changes from hand to hand.

Never Expect the Past to Repeat Itself

Donald Trump has a long list of “accomplishments” while he has been in office.  Of course, many people believe that his so-called accomplishments are failures.  He knows that he can’t win re-election by running solely on his accomplishments.  He also has to run on what he will do during his second term in office.

In poker, we expect the past to repeat to a large extent but we can’t plan an approach to a hand solely on how a different hand played out.  We need to use the past for the insights it gives and we need to be forward-looking at all times as well.