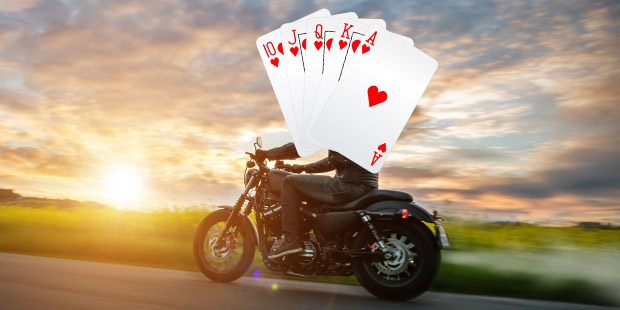 When you talk about playing poker, people often believe that you can either play at a land-based casino or play poker online. However, poker appears in different shapes and forms, one of which is the poker run.

Poker runs are special events that people often use to raise money or support one cause or another, which is an original way to get the community involved in one major project.

Learn a bit more about what poker runs are and where they are going to be held in the upcoming month, and have some fun!

Online poker, the most common variation of the card game, is all about the solo player and what he can do to win the biggest prizes. Poker runs, however, are the exact opposite.

Those runs are designed to bring people together, and more often than not – raise some money for a good cause. In most events, the participants use a single type of vehicle: motorcycles, boats, and horses are the ones used most often.

However, sometimes, the event’s organizers choose to allow the participation of rarer transportation methods such as snowmobiles, skateboards, and more.

Every event is designed a bit differently, but they all revolve around the same idea. At the beginning of the run, or in the duration of it, the participants pay a small fee. They get a map with five to seven locations they have to visit, and at each location, they will draw a card. All in all, the goal is to try to assemble the best poker hand by the end of the event.

In some cases, one of the stops along the route will include a game of skill that can award the participants with extra points, which adds even more intrigue and excitement to the experience.

Plenty of poker runs are about to take place all around the US. Here are some of the events you might have heard of before:

There are plenty of other runs anyone can join, some that are designed to raise money, while others are organized for the sole purpose of having fun.

Joining a poker run is an exciting way to rediscover your passion for playing poker. Whether you participate in the race yourself or follow its progression, you are bound to have an exhilarating experience!