Top Poker Pros You Should Know About 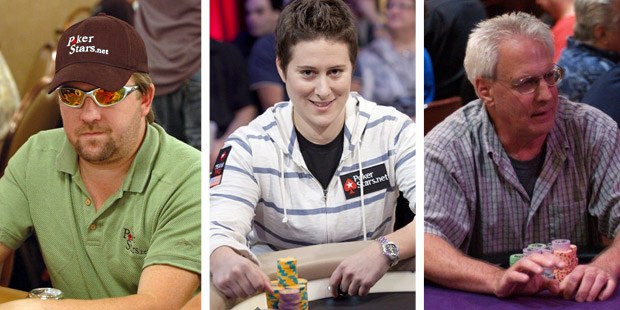 When you watch a poker game unfold, especially when it comes down to the cream of the crop, there is no denying the fact that those talented people leave their hearts on the table, alongside their cards.

Watching poker pros in their element is a thing of beauty, and you can learn from it if you want to become the next online poker sensation.

But since there are so many poker players out there, how do you know who is the best of the best? Who should you look up to when you strive to learn as much as possible about the game?

To help you out, we’ve created a list of some of the most inspirational poker players out there - not necessarily the best-known names with the most WSOP bracelets or net worth, but inspirational nonetheless!

If you haven’t heard about Chris Moneymaker yet, you need to do your homework. This poker player changed the face of poker forever, after becoming the first world champion that secured his seat in the WSOP after entering an online poker tournament back in 2003. Only 27 years old at the time, the poker player was an inspiration to hundreds of amateur poker players around the globe, which started the Moneymaker effect.

His surprising win gave hope to all those players who never thought a poker career was possible for them, and he has been a prominent figure in the poker industry ever since. Up until now, Moneymaker earned a total of $3,883,864, and he even managed to land himself a spot at the Poker Hall of Fame earlier this year.

Although Selbst is a retired pro poker player, we had to include her in this list. Selbst was a great inspiration to many women in the industry, as she was the first women to be ranked first on the Global Poker Index. Throughout her career, she earned a total of $11,851,381 and won the WSOP three times.

It comes as no surprise that Selbst inspired plenty of female players to pursue their dreams, as she is highly accomplished, and had a spectacular poker career that others dream of having.

Fleddermann might not have had the most lucrative career in history, but his story still manages to inspire poker enthusiasts who play poker online.

Back in 2004, the poker player had a tough time trying to turn his passion for the game into a career. As legend has it, Fleddermann had only $4 in his pocket when he decided to leave Las Vegas behind and try his luck in Mississippi, which turned out to be the smartest decision he ever made.

By the end of the tournament he joined, he managed to win more than $65,000, going on a winning streak we can all envy. Fleddermann’s story only serves to show that persistence pays off, so never give up on your dreams!

Are You Inspired Yet?

There is a lot you can learn from every poker player, so before you start playing, learn from the masters! Think about what made those players great, and whether you can do the same to get to the top as well. Are you ready to start playing?  Everygame Poker is the best starting place for YOU!