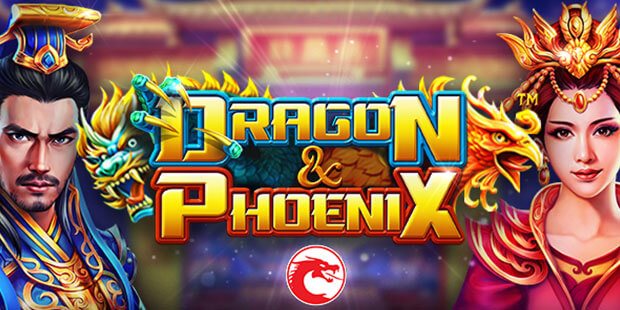 Enter a realm where riches and wealth are overflowing in our newest Betsoft game, Dragon & Phoenix!

Dragon & Phoenix is our newest slot by Betsoft. This game will take our players to the royal court of the legendary Jade Dragon and the Golden Phoenix!

This great slot by Betsoft is based on the Chinese folktale of the Dragon and the Phoenix. The story tells of a majestic jade dragon and a beautiful golden phoenix that lived on opposite sides of the celestial river. One day, they met on a magical island in the river and found a shining pebble. The dragon washed the pebble clean with water from the river and the Phoenix polished it with dew drops until it became a dazzling pearl. The light of the pearl was so brilliant that it tempted the Queen of Heaven and that night she sent her guards to steal it.

On the next morning the dragon and phoenix woke to find the pearl gone and searched endlessly for it until they saw it shining in the sky. They flew up towards the light to retrieve it, but in the commotion the pearl fell from the sky and became a lake on the land below. Not willing to part with the treasure they worked so hard to create, the dragon and phoenix built their castles next to the lake in the guise of mountains so that they could watch over their treasure and legend has it they still are to this day.

Dragon & Phoenix is a visually stunning video slot game that illustrates this amazing story. Find and protect your treasure just like the dragon and the phoenix with this game’s awesome features.

A feature that you will enjoy is the MONEY TREE SCATTERS. Once 3 or more money trees appear anywhere on the reels, you will be awarded an instant win and to make things even better you will also be rewarded up to 15 free spins!

The ROYAL COUPLE WILDS take a leaf right out of this story’s book. Search for the Wilds on reels 2 to 5 just like the dragon and phoenix searched for their pearl for a full-reel wild adventure!

You will find riches, wealth and endless opportunities in our newest slot by Betsoft and you can find it here in the casino!