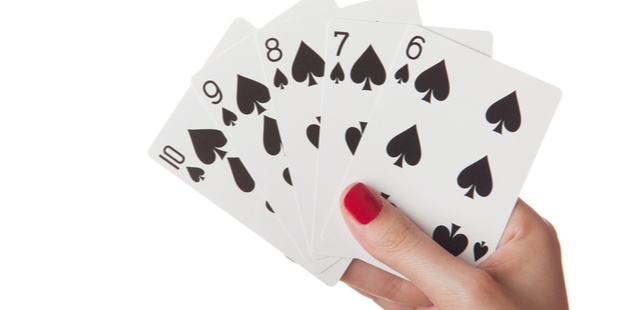 One of the most coveted hands in offline and online poker is the straight flush. And while most poker players wish to get a flush when playing poker, it doesn’t happen often enough.

In fact, the probability of you getting a straight flush is somewhere between 0.00139% and 0.0279%. It all depends on what poker style you’re playing, but at the end of the day, the odds are still against you.

But while your chances of beating your competition with this spectacular hand aren’t great, multiple poker pros won astounding prizes thanks to this specific combination of cards. Now it’s your chance to review some of the biggest wins involving one of the best hands in poker!

Selbst vs ElkY
The first win we’ll mention took place in a tournament back in 2018, and it was rather shocking. During the event, two strong players competed for the jackpot, and in the end, the underdog won. The spectacular match featured poker legend Vanessa Selbst and Bertrand Grospellier, a French poker player that goes by the nickname ElkY.

At the beginning of the game, Selbst had two aces in her hands, which meant she had about an 81% chance of winning. On the other hand, ElkY had a ♠9 and ♠7, which didn’t look all that promising. So when the flop featured a ♠5, ♠8, and ♦10, everyone was shocked to see them both go all in. And while Selbst was sure she has the upper hand, fate had other plans! The turn featured a ♣2, and the river sealed the deal with a ♠6, which changed the outcome of this match.

Trickett vs Kurganov
Sam Trickett and Igor Kurganov sat at the same table during the 2013 Aussie Millions tournament. In one of the matches, the two were the only ones that didn’t fold pre-flop. Unknowingly, they both joined what turned out to be an epic battle.

Kurganov had a ♠J and ♠7, which looked much stronger than Trickett’s ♠5 and ♠6. Even when the flop revealed ♠2, ♠3, and ♦9, it seemed that Kurganov is destined to win. However, when the turn revealed a ♦4, the odds changed in favour of the British pro.

What made this match even more interesting is the fact that both pros had reason to believe they have the winning hand. That led Kurganov to go all in, which was exciting to watch. But at the end of the day, Trickett had an unbeatable hand, which meant he left the table $1,945,000 richer.

J.C Tran vs Peter Eastgate
Let’s go even further back in poker history. Over a decade ago, Tran and Eastgate faced each other in a poker tournament. The two started the match on even grounds, as Eastgate, had ♦6 and ♦3 in his possession, while Tran had a ♦2 and ♣Q. The flop revealed a ♦Q, ♦4, and ♣8, which meant Tran had more chances of winning the game.

But as the turn revealed a ♦5 and the river showcased a ♦7, the situation has changed dramatically. He left the table with over $450,000 and was the youngest pro to win a WSOP bracelet by 2008.

Are You Ready to Place Your Bet?
Whether you play poker online or as a part of a live tournament, nothing will make you happier than getting the winning hand. And while having a straight flush is a rare occurrence, it can happen when you least expect it!