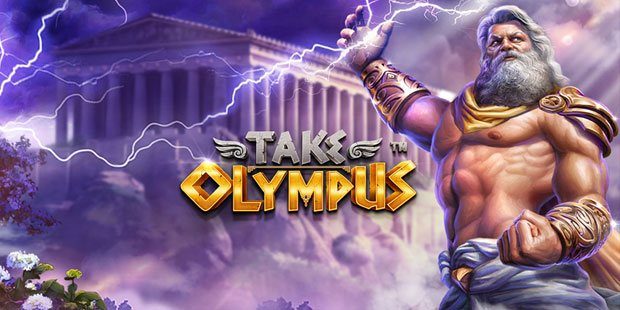 Take on this adventure worthy of the gods in our new Betsoft slot Take Olympus!

Our newest slot by Betsoft will take our players to the heights of Mount Olympus where they will face off against the gods of Greek mythology!

Mount Olympus is the home of the gods in Greek mythology. According to authors, the mountain was created after the Titanomachy, the epic battle between the Olympians and the Titans. As a result of this battle, the Olympian victors created their new majestic home – Mount Olympus. It was hidden from human eyes by clouds which constantly covered its peaks. It is said that if a mortal were to make it to the top of Mount Olympus he would be given a place among the gods!

Take Olympus is a 5-reel, 50-payline slot game that will take you on an adventure worthy of the gods. The Cycle of the Gods feature will keep things exciting with each new god. The Wrath of Abundance feature will show you the powers of the gods and finally the All Father's Grace Feature will have you feeling blessed by the king of the gods.

Another feature that our players are sure to love is the Wrath of Abundance feature. Each god has their own special power that can affect your game and during each cycle these powers will be on display.  Some powers will give you multipliers, some powers will stop symbols from moving, but the only way to find out what they all do is to play!

Last but not least, we have the All Father's Grace. Zeus is the king of Olympus for a reason, he can use all the abilities of the other gods! Through the All Father's Grace you can get 5+ Wilds on the reels or 5+ Symbols turned to mystery symbols or even a random number of free spins, but only if it is Zeus' will.

Get ready for a game worthy of the gods! This slot will be here on the 18th of February!