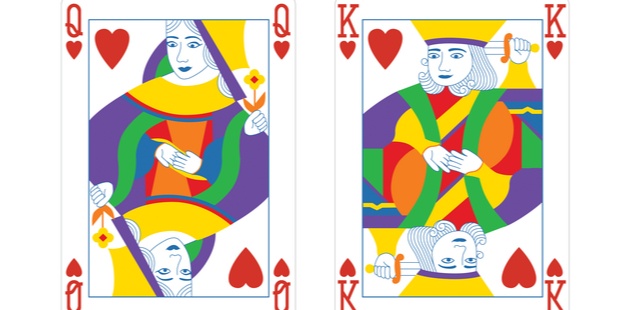 Poker cards have looked the same for quite some time, and most people didn't question their design or meaning. For many decades, the higher-valued cards were represented by members of the royal family – kings, queens, and princes.

However, some people believe that the popular card design is outdated and that it's time to change things up. In recent weeks, poker players have been talking about an alternative kind of design for a deck of cards: genderless figures.

What stands behind the proposition of changing the current deck? Will it influence poker download games? And what does history say about changing trends in card design? Learn all of that NOW!

Woman Proposes to Use a Genderless Deck – and the Masses React

Indy Mellink, a young woman from the Netherlands, came up with the idea of designing a gender-neutral deck of cards. The forensic psychology graduate even went as far as manufacturing and distributing more than 1,500 packs of cards to spread her message.

But what gave Mellink the idea that something needed to be changed? Apparently, while playing card games with her family, the young innovator figured out something she has never paid attention to before. Why was the king automatically worth more than the queen?

In an interview, Mellink said: "… it's just another way of saying hey, you're less important". While cards' value might be a small thing, it is still a part of our society that tells women they aren't as important as men. Maybe, by changing seemingly trivial parts of our culture, we will be able to reduce gender inequality on a bigger scale as well.

Instead, the new deck of cards includes gold, silver, and bronze imagery to replace the royal characters that we know so well. But what did people, including some online poker players, thought about this initiative?

When news of the gender-neutral cards deck made headlines, some people were supportive – and some were not.

The head of the Dutch Bridge Association, for example, said: "… But gender neutrality, I am all for it! It’s great that someone of this age has noticed this". However, she also said that the new type of cards won't be used anytime soon in official games, as it will require a rewrite of the existing rules.

Mellink also claimed that many of the people she approached have never even considered the gender issue when playing cards. Therefore, they haven't had a lot to say about the subject.

But most tweets and online reactions actually mocked the idea. Reuters reported that one man said: "…it's ridiculous", while another made a valid point: "… Isn't the ace the highest card already? And that is gender-neutral. Check and mate."

Card Designs in the Past

While we're all used to the cards that started this entire debate, in the past, this style of cards was used mainly in France, and then reaching Belgium and England. The French were the first to officially use the classic suits - ♥, ♦, ♣, ♠.

Other countries, however, had a different vision as to what playing cards should look like. In the past, Spanish card suits included cups, coins, clubs, and swords. The same thing goes for Italian decks, although the designs looked a bit different.

Germany also had unique card suits – including hearts, bells, acorns, and leaves. And even now, you will be able to find some of those traditional cards in various countries all across the world.

Overall, it seems that people weren't overly enthusiastic about the idea, but who knows? Maybe in the future, we will see new card designs gracing the poker tables.

For now, it seems more likely that people will be able to find gender-neutral cards only in gift shops and the likes of it.