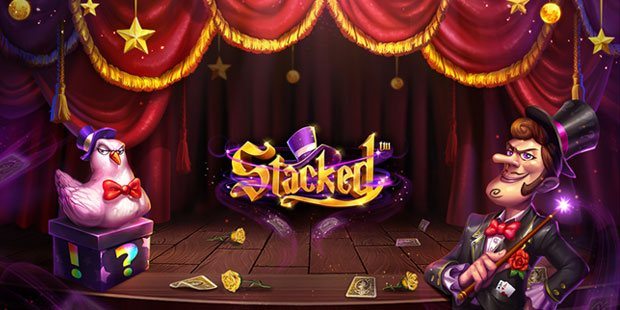 Come and see what the magician has hidden up his sleeve in our new Betsoft slot Stacked!

Our newest slot by Betsoft will take our players to the front row of an amazing magic show where mystery and illusions could be hiding great prizes!

A magician is entertainer who is skilled in producing illusion by sleight of hand and deceptive devices. In this 4-reel, 20-payline slot game you will have all the powers of the magician at your disposal. Enjoy the show as the magician fixes the reels in your favor and lets you look into the mystery boxes. And just when you think the performance is over, the magician will have one more secret trick to end the show!

If you're enjoying the show so far then you will love the Slight of Hand feature. When no one is looking, there is a chance for the magician to "nudge" a reel up or down to potentially award you a win!

And if you are not enjoying the show then the magician has just the trick to change that with the Fix the Trick feature. The magician has a chance to fix the reels in your favor after any spin without wins. Up to 8 random symbols from the reels are chosen by the magician, turning them into a stack worth 3x the value of the symbols! If the wild symbol is chosen, it will pay out as much as the highest value symbol.

And finally the magician has kept his best trick for last, you will love the Secret Trick feature. When this trick is performed, a random number of face-down mystery cards are added to the reels! Once all the reels have stopped, the face-down cards are magically turned over to reveal the same symbol!

Get ready for an amazing show! This slot will be here on the 18th of March!