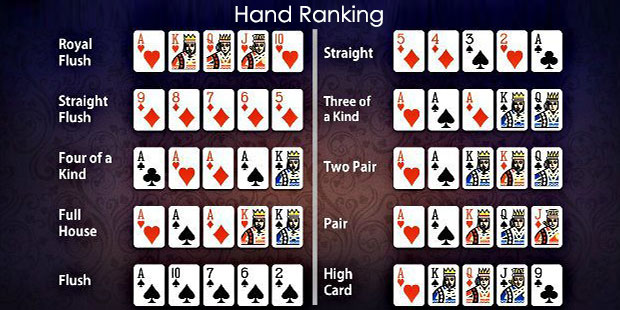 Hello and welcome to the exciting world of poker! We’re not surprised you have decided to join millions of fans around the world, but we are just wondering what took you so long?!

Whatever the reason, Everygame is happy you've decided to join us here.  Please register for a new account on our super-simple sign-up form.

Now that you've set up an account and grabbed your bonus cash, let's get down to business.

Please allow us to guide you through the various elements of this fantastic game called POKER, starting with an explanation of card combinations you should go after in order to get a shot at collecting the pot.

To start with, know what you’re playing with. Each deck consists of 52 cards divided into four suits: Clubs, Hearts, Spades and Diamonds. The lowest value card is 2, followed by 3 to 10, Jack, Queen, King, and finally Ace. As well as being the highest card, Ace can also be used as the lowest card valued at 1. So how can you combine them in order to potentially win the game and collect the cash?

Royal Flush is the highest ranking hand and can’t be beaten. It consists of a straight (5 cards in sequence) from 10 to an Ace, all of the same suit. Please note that in poker all suits rank equally.

The second strongest hand is a Straight Flush, again 5 consecutive cards of the same suit. Should two players get a Straight Flush during the same round, the highest ranking card between them decides who wins the pot.

Four of a Kind

As the name indicates, this hand consists of any four cards of the same rank. Naturally, in the event of two or more players having this hand, the higher-ranking quartet wins. When playing with community cards (cards shared between players), the fifth (odd) one players are holding, the so-called kicker, decides who wins the round.

A Flush is formed by any five non-consecutive cards of the same suit. If two or more players form a Flush, the highest ranking card wins. If needed, the 2nd, 3rd, 4th and even 5th cards will be compared to decide which one wins. In the unlikely event that all cards between the two players are the same, the pot is divided in two.

Straight consists of any five consecutive cards of different suits. Do note that an Ace can be used at the beginning or at the end of the straight, meaning it can form A-K-Q-J-T combination, as well as 5-4-3-2-A. In case two or more players have a Straight, the highest ranking card wins.

Three of a Kind

This one surely needs no explanation. As in examples above, the highest pair wins, and the 3rd, 4th and 5th cards can be used to determine the winner in case two or more players have identical pairs.

The worst you can do is to get any five card hand not mentioned above. Clearly, the highest ranking card wins when more than one players show identical hands.

Some poker variants feature additional winning hands, as is the case with Omaha Hi-Lo. In this game the pot is split in half, rewarding both the best high hand and the best qualified low hand.

A low hand qualifies if a hand consist of cards with individual values lower than 8, and there are no pairs among them. In such hands Aces are counted as 1 and can form the best low hand A-2-3-4-5. In the event that two or more players have identical low hands, they will split the low pot between them.

Having learned the ‘ABC’ of Poker, feel free to check out additional useful information about this game provided here at Everygame. And when you feel ready to give it a try, take a seat at one of our virtual poker tables and test your new skills against live opponents. We promise you’ll have loads of fun!