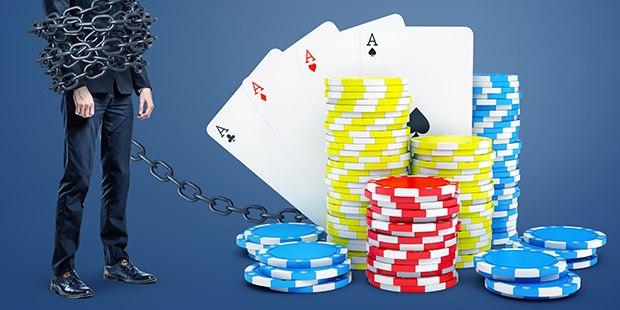 The second Responsible Gambling Conference recently took place. Casino operators are always looking to keep their gamers well within the limits of safe gambling as opposed to problem gambling. Poker player have a unique set of symptoms that point to possible problem gambling.

Iron the Problems out of Your Poker Play

Problematic poker playing is not addictive playing.  It's also impulsiveness, lack of attention, poor concentration, excessive emotions and more.  Read here about taking the rough edges off your game to improve your performance

What are Some Symptoms of Problem Gambling Amongst Poker Players?

It is not yet an annual event but the second Responsible Gambling Week in Ireland and the United Kingdome took place from November 1 to November 8.  Everyone involved in gambling, from employees of online casinos and poker sites, to many workers at land based casinos, bingo halls, bookmakers, and others encouraged gamers to “Talk about Responsible Gambling”.

The Canary in the Coal Mine

Even as gambling becomes more popular with average citizens, the specter of gambling disorders are the proverbial canary in the coal mine.  For this reason, gambling site operators, both land based and online, seek to be in front of the task of teaching gamblers to gamble responsibly rather than to find themselves behind the government’s efforts to stem problem gambling.  If online poker sites were to be laggard in this endeavor, they would likely face restrictive regulations that may or may not slow down problem gambling but would surely slow down their business.

In Britain, less than 1% of gamblers are considered problem gamblers.  In Ireland, the number is more than 2%.  Still, both of these countries are far below the averages in other countries.  In the EU the number is over 3% and in the United States, it is almost 4%.
So, efforts by the Industry Group for Responsible Gambling (IGRG) to keep the number of problem gamblers under 1% in Britain and to lower the percentage in Ireland are laudable indeed.  These efforts are exactly what the Responsible Gambling Week is all about.

The Role of Poker

Many people think that problem gambling is exclusively the domain of the fast-moving games of chance such as slots, roulette, craps, and video poker.  It is true that poker moves at a much slower pace. Still. Some problem gamblers have difficulty making decisions that are unique to poker.
Since poker is such a slow-moving game, there is a big difference between a player who might spend hours playing and manages his or her bankroll very well to the gambler who sits down to play once a week or less frequently and loses more than he can afford to lose very quickly.
Here are a few areas where some poker players cross the line from being regular players to becoming problem gamblers.  These symptoms are essentially the same whether the player is playing poker at a land based casino or at a poker online site.

Professional Texas Hold’em players expect to muck at least 70% of the two cards they are dealt before the flop.  Sometimes, you can hold onto a poor hand in order to see the flop if the price is right: others might be just calling the big blind and not raising.  Some pros can play 4-2 off suit not because they think they will win but if it’s cheap to see the flop they very well might win with 4-2 unsuited and it shows the opposition that you aren’t a complete book player; that you’re capable of a bluff once in a while.
Problem gamblers will say that they just want to see the flop even if the cost is too high and their hand is too low.

This area of trouble is a partner to the inability of problem gamblers to muck a poor hand.  Problem gamblers will see possibilities that are far from realistic and will bet into seeing the flop even though in most cases the flop won’t help them.

If you get a pair of aces on the deal, you automatically have the best hand.  This may not be the case after the flop if the guy with the pair of deuces gets a third deuce.  In order to know the real strength of your hand, you need to know how many outs you have.  If you think an opponent may have a straight and you have a pair of aces, you have very few chances to win.
Problem gamblers lose a lot of money betting on hands that they should be folding.

Folding at the highest professional level is so hard to learn that even most pros aren’t good at it.  The difference between professional players and amateur players is that the pros can find a way to fold a straight when they are beaten.  Pros can fold a flush when logic says that the betting opponent is either bluffing or has a full house.  A problem gambler won’t fold even when it is almost certain that he is beaten on the hand.
Folding is a powerful skill that saves poker players a lot of money that they would otherwise be throwing away on losing hands.  Just like any skill folding has to be learned over a very long time, many mistakes, and many hands to learn from.  Problem gamblers waste not only their money but also their time; they refuse to take the time to learn a skill that will keep them playing longer.

A bad beat is when you were way ahead, bet correctly, and lost to a wildly improbable river card.  A good player knows that 90-10 odds mean that the bad beat may come at any moment.  Good players keep their equilibrium while problem gamblers bet wildly on the next hand in order to get back what they thought was rightfully theirs.

Beaten by an Amateur

Every pro was once an amateur.  The best amateurs learn enough to become pros.  Never underestimate an amateur; they may be betting foolishly but sometimes foolish bets will win.  Problem gamblers get furious when an amateur plays the hand “wrong” and still wins.

In this regard we have only one bit of advice: never insult an opponent.  Insulting an opponent is a clear sign that you have a problem and that you are trying to foist your problem onto the shoulders of an unsuspecting opponent.

Whilst alcohol and drug dependency are fully acknowledged in modern society, problem gambling still is spoken about in whispers.  One of the reasons for Responsible Gambling Week is to make it more publicly acceptable to talk about problem gambling.