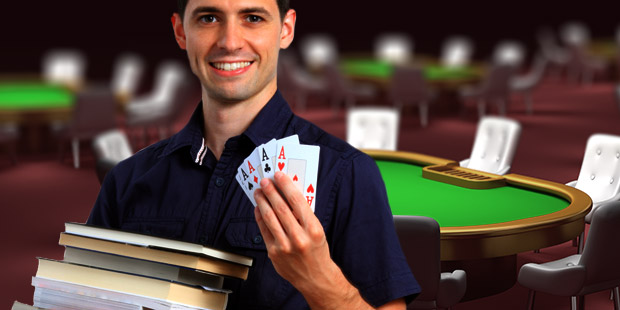 Many poker players place too much emphasis on big hands. They think that big hands bring big wins. They might, but often they don't. Small gains and small lessons are much better as winning measures and as learning tools. Develop the skills to evolve as a poker player.

We want to get a lot better at poker.  Even the pros constantly try to improve their games.  There are interesting aspects of a sort of evolution involved in the life-long pursuit of improvement in our poker skill.

What Can I Do to Get Better at Poker?

Everyone has a fairly good idea of what evolution means: the development of more sophisticated living creatures through the newer creatures’ enhanced ability to survive.  Good poker players are made not born.  That means that the poker player you were when you started out can evolve into a much better player.
Studious players will improve whether they play poker online or on land.  One big advantage of online poker is its ready availability, every day.  If it takes a thousand hands to advance a step, you’re a lot more likely to get those thousand hands at an online poker room than at a land based casino.

Many poker players believe that you more or less break even on most hands and win big on those monster hands you get in most poker games or sessions.  This is a mistake.  The evolved poker player knows that you often don’t win big with super hands simply because no one else has anything they can continue with.  So, you bet pre-flop with a pair of fours and flop quads and everyone else folds because two fours don’t help players who were playing ace-king or ace-queen.
The reality of long term poker success is to win small amounts with hands that aren’t so good but are better than everyone else’s hands.  It takes a lot of deep understanding of poker to win with an ace high or a middle pair.  You have to read your opponents better than ever.  You have to evaluate the hand to determine if you should stay in the hand or fold.  You have to manage your money well.
In short, you have to learn how to survive in less than ideal circumstances and, more than survive, you have to learn that small wins are the difference between mere survival and thriving.
Over the course of hundreds of hands, everyone will get about the same cards.  No one will be so much luckier than everyone else in terms of high pairs or great flops.  Evolution as a poker player means making the most of the cards you’re dealt.  And this includes saving your assets by folding pre-flop on a vast majority of hands.

Learn from Your Own Experience

This is a very important corollary to the above conversation.  We need our own experience to evolve into the poker players we want to be.  Watching poker on YouTube is entertaining but it doesn’t show you two important elements from the previous discussion.  First, it doesn’t show you all the hands the super players from these YouTube clips fold pre-flop.
Second, it doesn’t show you how many small pots the great players win to keep their stack high and to allow for the inevitable bad beat.  The best pros know that they will, like everyone else, suffer a bad beat.  By winning a lot of boring hands—hands that aren’t ready for YouTube prime time—they survive and thrive and advance.

Play at Your Own Level

In any sport or in any game, your enjoyment is greatest when you’re playing against players of roughly the same skill as you.  Say you’re playing SET.  If you play against a great SET player, you’ll lose every time, it will become less and less fun, and eventually you’ll suggest going on to some other game where the playing fields is more equal.  Your great opponent will also start to feel that it isn’t fun to see sets that no one else can see.  He or she will welcome moving on to a more evenly matched game.
Poker is different.  In poker, to win long term you have to play against players who are less skilled than you but, to evolve as a player, you have to play against players who are better than you.
When you’re playing against better players, you have to manage your money extra well.  You might fold more often.  You might look to their bluffing tactics rather than try to hone your own bluffing skill.  As you evolve, you’ll stay in more hands and you’ll bluff more often.  The key is that to evolve as a player you need to play with better opponents and work hard to reach their level.

You don’t have to be so much better than your opponents to win and you don’t have to be much less skilled than your opponents to learn.  We evolve incrementally on both sides of this aspect.  If you play against far less skilled players than you, they will refuse to play with you.  If you play against far better players, you will lose too much to make the learning experience worthwhile.
You will also find that players are getting better all the time.  Essentially, everyone is evolving into better poker players.  You can learn a lot about poker playing against less skilled players and they will be looking to learn from you as well.  Your superior skill won’t show up on every hand—not even on 10% of hands.  You’ll know that you have truly taken a step forward when you go through a hand and realize that you’ve learnt something from it.

Everyone Gets the Same Cards Over Time

The key to becoming a better poker player is to make the most of the cards you’ve been dealt.  If folding pre-flop is the best play, you can learn a lot from a player who decided to stay in and “see the flop”.  He or she might lose a small amount to see the flop but small amounts tend to multiply into long term losses.
You can play a bad hand once in a while to throw opponents off guard but don’t play a bad hand when it’s too expensive to do so.  Everyone knows that winning in sports is a combination of skill and luck.  We all recognize that over the long haul the luck tends to even out and the skill side prevails.  So, take some chances and learn from every hand.