Can You Become a Pro Poker Amateur? 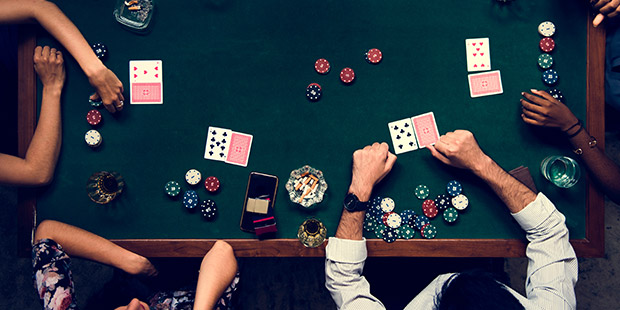 A Professional poker player has behavioral characteristics that set them apart from recreational players, even pro poker amateur players.

You Can Improve Exponentially by Playing Poker Online

The dream is not merely about competing against the poker pros; it's about winning a big pot.  Of course, you almost have to become a pro poker amateur first yourself before you can really hope to win against a table full of true professional poker players.
Playing online poker is a great way to learn about different situations and different odds.  Every hand you play and every hand you watch should be a teaching moment so you get better at recognizing situations and opponents long run strategies, more and more quickly over time.

Online poker also has the advantage of allowing you to concentrate on the hands without worrying about whether or not you are giving away your own hand with a tell.
Here are some of the traits you’ll need to develop if you want to compete with the professional players as a pro poker amateur.

The best poker pros might be screaming inside but they don’t show emotion even after a really bad beat.  The great exception to this phenomenon is the childish emotionality of Phil Helmuth.  He lets his emotions get the better of him to the degree that he’ll call an amateur that just beat him badly an idiot for playing a particular hand in tournaments. That is crazy and not what we'd expect from a player of his stature.

Phil Helmuth is a World Series tournament champion, but we feel that he could have been much better if he had ever learnt to stay calm in the face of adversity. One great way to learn to control your emotions better is to play poker online and within a few months you'll see your poker games and strategy improve.
You’ll never be as emotional as Phil Helmuth, but excessive emotionality can come to far lesser degrees.  You need to stay calm because the next pro poker hand is already starting.  You might be one of the blinds.  You might get a good hand and underrate it because you’re still peeved about the bad beat.  Even worse, you might get a bad hand and overrate it because you’re still peeved about the bad beat.  Everyone suffers a bad beat at some point and a pro poker amateur lets it go immediately. He's in it for the long run, not just a few hours of looking for a win. It doesn't have to be a case of poker boom or bust.
There are many situations in life where we need to keep our emotions under control.  Driving, waiting in a queue, suffering a family member’s pontifications at Christmas dinner, and going to a store to buy an item on sale and finding out that the sale ended the day before are just a few examples.  The list is endless and our extravagant emotional range is also endless.  At the poker table, too much emotion gets us into big trouble,make us look pretty much like an amateur and ultemately not a great poker player.

In this sense, poker is a kind of sport.  In regular sports, if your opponent knows what you’re going to do next, he or she will know what to do to put you at a disadvantage.  Poker, like any game, is all about putting your opponent at a disadvantage. A good pro poker amateur will excel at doing that and the amateurs will always lose out.
Here's some great pro poker advice. In many games, even highly intellectual games like GO and chess, you might see a very subtle way to put your opponent at a disadvantage.  But you make that move “in the open”.   This is true in most games.  Even in Monopoly, everything you do is in the open but you could work out a secret deal with one opponent to weaken a stronger opponent.
In poker, so much is not in the open that you have to vary the way you played poker in the past, in order to fool your opponent into thinking that you’re going in one direction when, in fact, you’re going in another direction.
One way we vary our pro poker play, and one in which many pros, especially the top pro poker player excel, is to make the same play with radically different hands and move your bets accordingly.

When your opponent doesn’t know if you’re raising as a bluff or with a good hand, he or she has little to go on in making their own decision.

When pros play each other, a lot of money changes hands in situations where the winner forced the others out of a hand with a bluff or when a winning hand folded because the player could not read the opponent. It's all about getting that playing edge with a smart strategy game, understanding your opponent and more than a little luck.

Many pro poker amateur players will stay in a hand that they should know they will lose.  They hope for the one out they need but if you have only one out, your chances of winning the hand and saving your bankroll are very slim.  We face reality in everything we do.  Some people are better at it in their lives than others.  That’s one reason why some people sell a losing asset whilst others will hold onto it “until it goes back up again”. Don't go down that wrong path.
The realist moves on and the nonrealist treads water.

A book was published many years ago in which the author advised us not to sweat the small stuff.  Certainly, a lot of the things we tend to focus on and even to pay too much attention to are really unimportant “small stuff”.  We all can list a hundred things that fall under the category of small stuff.
In poker, a lot of what pro poker amateur players consider small stuff, the professionals understand to be very important.  Pros watch the 70% of hands that they aren’t competing in as much as the hands that they do compete in.  A pro will pay attention without letting on that he or she is doing so. They're always looking for new answers, a fresh edge that most people wouldn't notice.

When a pro pays attention to the small stuff, it means that they are evaluating the other players in terms of the characteristics we have mentioned here.  A pro will follow the betting in a hand and look to see if any of the players is showing a tell.  When you’re in a hand against one opponent, you pay attention to that opponent.  But when a pro is out of a hand and two players are still in the hand, he or she is watching both opponents.  They are filing away in their game memory any little detail on that single day, that might become important later in order to develope their next winning game plan.

There is one other characteristic of professional poker players that doesn’t apply to even pro poker amateur players: professionals identify themselves as professional poker players.  Most poker players play casually.  It’s possible to appear to be above amateur status.  The best way is to follow the example of behaviors detailed here.  The big difference is that in most cases, an amateur can masquerade as a professional but in his or her mind is not a true professional. Nor can he afford to be. Bankroll is important, don't lose out on the fun in order to chase down the odds.

It isn’t necessary to be a pro in order to win a lot of money playing poker.  It is important to choose your opponents and rake wisely.  A true pro will see through you.  It might take time but the pro will figure you out.  So, the best way to win at playing poker is to play at people who self-identify as pro poker amateur players.  In that case, you’ll have the upper hand in the long run game, as a great, cool-headed, pro poker amateur for sure.