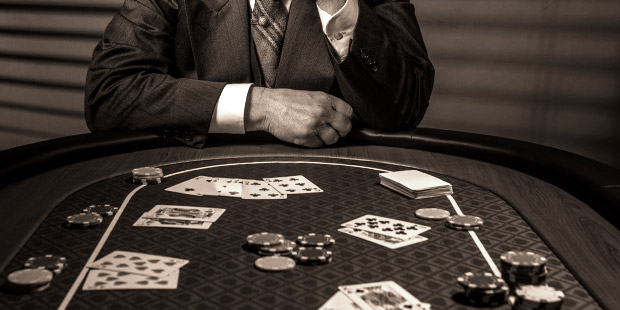 Poker is perhaps the most challenging game because, at the same time, we have to be both straightforward in our thinking and to think deeply about information we don’t actually have.  When we play poker, we learn just how hard “thinking” can be.

It’s obvious that thinking like a poker player is a lot different than thinking in normal, everyday situations.  Most of the decisions we make involve perhaps one or at the most two levels of analysis.  A top-level chef may have to decide if a small pinch of marjoram or a large pinch is called for in a recipe.  Even business decisions which require some financial and market analysis are comparatively straightforward compared to poker decisions.
The main reason that poker decisions are so much more difficult is that you don’t see your opponents’ cards.  Whether you play poker online or at a land-based casino, you need to make a considered decision without enough information to do so.  If there are two other players in a hand, the challenge is exponentially harder than if there is only one other player in the hand.
Online poker is easier only in the sense that bluffing is different online and it’s much more difficult to read tells.  Much of the challenge in thinking like a poker player comes pre-flop when there may be several players making small call bets to the big blind in hopes of seeing the flop cheaply.

Even if you know that you’re a lot better overall than an opponent, he or she can pull off a great coup that could cost you dearly, especially if you underestimate them.  This is one of the big flaws in Phil Helmuth’s game: he regularly underestimates weak opponents and even resorts to insulting them if they play better than he does on a given hand.
Let’s compare poker decisions with business decisions.  We have already said that in poker a lot of information is hidden.  In business, too, there may be some hidden information.  In poker, the opponent who knows what you don’t know is sitting at the same table as you or is connected online to the same poker room as you.
In business, your opponent is a competitor in business.  You may not even know that they are competitors until they enter the same market you’re in.  The other people involved are consumers who may or may not buy your product or service.  Because of the uncertainties of markets, the best strategy for any business is simply to have the best product or service for the target market.
In poker, we cannot guarantee having the best product; the cards don’t always fall our way.
A corollary to this maxim is that we should never overestimate ourselves.  Pride cometh before the fall.

It’s easy to see how this can happen.  When we start playing poker, we have no strategy but we quickly learn to evaluate our own cards.  The next big step is to evaluate our opponent’s cards even though we can’t see them.  We begin to be able to do so based on other factors that we can see such as their betting habits, tells, the size of their bets, how they develop a betting style and many other factors.
Going from being able to evaluate our cards to being able to evaluate hidden cards is a very big step.  At this stage, we begin to be susceptible to overthinking.  It’s important to try to remain as straightforward as possible.
There is here a comparison with blackjack.  In blackjack we see only one of the dealer’s cards and if the dealer has a 10-point card or an ace, many blackjack players panic and expect the hidden card to also be a 10-point card.  Many blackjack players in this situation will surrender even though statistically surrender is a poor decision.
We can make ourselves crazy by going back and forth with “he knows that I know that he knows” kind of analysis.  This is the epitome of overthinking.  Many players have to train themselves to not overthink because it is so easy to fall into that trap.
In short, overthinking is a lazy way to evaluate a hand.  It actually delays the decision.  You might delay revealing your decision based on a sound strategy of trying to fool the opponents with an eye on future hands; but you should come to the decision fairly quickly.  When you feel that you are thinking too much, you should stop yourself and make your decision based upon your analysis up to that moment.

In poker, every good player is a type of negotiator.  You can improve your poker game a lot by reading some good books about negotiating.  One key element in poker negotiating is that it starts and ends relatively quickly.  In business, a negotiation may take months to play out.  In poker, every negotiation is over in a matter of seconds or minutes.
That means that you’ll lose a lot of negotiations in poker and it leads us to the next step.

Thinking like a poker player means that when you lose a hand, you use the experience as a learning moment rather than as a moping moment.  This is also much harder to do than we might think.  You lose a hand either because you made a bad decision or because you were simply very unlucky but the game itself and your opponents don’t care.  They are ready to get on with the game and you should be, too.
Even a single bad beat doesn’t end your poker session or have a lasting effect on you unless you lost all your money on the hand.  So, thinking like a poker player also involves realizing your own strengths and weaknesses and playing “within yourself”.
Robert Townsend became the president of Avis Rent-a-Car in the mid-1960’s.  He wrote a great book about that experience called Up the Organization.  In the book, he made two very important observations that we can apply here.  First, he was hired to make Avis much more competitive.  Second, he decided on an advertising campaign through faith in the advertising company he hired to produce a “winning” ad campaign.
As the president of the company, he realized that his decisions would be correct less than 50% of the time and that a success rate of 50% would be excellent.  He also told the advertising executive he hired that he would run any campaign they chose as long as they said it was the best they could do.  In the end, no one “liked” the ad campaign when they presented it to Avis executives, Avis ran it anyway, and it became one of the most successful ad campaigns in business history.  Go know.....(??)