Even Online Poker Players Have Tells 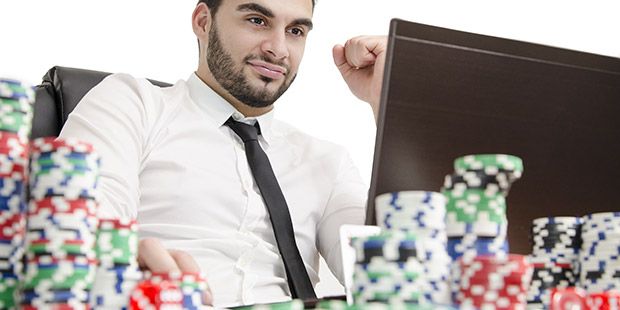 The Importance of Learning Not to Telegraph Your Inexperience

Online poker players need a different sort of antennae for detecting tells.  New and inexperienced players need to be careful to demonstrate calm and determination as opposed to hastiness and lack of clear direction.

The science of reading poker tells when you’re playing opponents in person is well documented.  It’s a lot harder to identify tells when you play poker online.  Whilst the experience level of opponents is also very important in reading tells at a land based poker room, it is even more important when you’re playing online poker.
This is primarily because in person you can see the tells whilst online you have to surmise the tells from other indicators.  This is very similar to the challenge we face in poker wherever we try to figure out what an opponent might have even though we can’t see his cards.  If we can do that fairly accurately, we can also identify tells even though we can’t actually see them.

Overuse of the Chat Box

Inexperienced players like to use the chat box.  As they get more experienced they may come to realize that they are giving things away as they chat.  One example is the player who goes on about a big pot that he or she won or conversely moans and groans about a bad beat.
For one thing, what one player may deem to have been a bad beat might to a more experienced player be nothing more than “poker”.  If a player uses the chat box a lot and then slows down his or her use of chat, it might signal that they are having a run of poor hands.  Then, if they jump into a pot, most opponents will think that they’ve gotten a good hand rather than that they are bluffing with unsuited low cards.
The enthusiastic tone a player uses at the start of a game may change as they get tired or a little bit tipsy.  If they are actually drunk, it will be very obvious to everyone.  If they misspell words that they never misspelled before, that’s a good sign that they are not as alert as they need to be and the losses will follow.
Reading tells is always a form of reading between the lines so paying attention to a player’s chat behavior may be a very telling tell indeed.  The best way to avoid revealing oneself in chat is to never use chat at all!

This is a lot more than just impatience.  It is also indicative of impulsiveness and a strong deficiency in prudent behavior.  The one thing that poker players need above all else is prudent behavior.  An impatient player is imprudent.  Even if you know what your next move will be, it’s good to wait a while before making the move.
Calling too quickly is often a dead giveaway that you think that your hand is better than everyone else’s.  It may very well be.  But if the opponents have relatively poor hands and you jump in too hastily, it will scare away some money that you could have won.
Another tell that comes from impatience is betting or calling too quickly after either a big win or a bad beat.  Since most hands are not good, if you jump in too fast, sharp opponents will put you on a bad hand.  This is the case both after a big win and after a bad beat.  After a big win, overly fast play may indicate that you feel unbeatable.  After a bad beat, overly fast play may indicate that you are desperate to get back to the winning side of things and are thus prime target for losing good money on a bad hand.

When you play poker online, you need to portray yourself as an experienced player.  If you say in chat that you’re really looking forward to playing poker, that you’re happy that you discovered the poker room, that you once visited the home country of an opponent, and any other sophomoric comments, your opponents will put you as a new poker player and a rube.
If it was all a bluff, they will know very soon and will all gun for you for the rest of the game.  So players should introduce themselves and then get down to the business at hand which is poker.
Inexperience also shows up if a player makes an unusual play in a common situation.  A common situation is to check raise.  This play is an attempt to trap an opponent.  But if you decide to check raise, you need to be sure that the raise is a reasonable amount to either see another card or enough to call and see the hand.  If you check raise a bit amount of money it will either frighten the opponents away or will cause a better opponent to re-raise you with a better hand.  In that case, the inexperienced player will have trapped him or her self.

Overuse of the Check Raise

Every poker player sees many instances of this tactic on YouTube.  Inexperienced players don’t often realize that these YouTube clips are chosen and edited for entertainment purposes and have actually little resemblance to the game that the player is actually playing.  The most obvious use of the check raise tactic is to trick opponents into betting when they have weaker hands than yours.
Okay, you got me.
Another use of the check raise is as a bluff.  This is far more common amongst inexperienced players than amongst players with a lot of time under their belt.  If you are inexperienced, it will show in your overall play.  If you then check raise as a bluff, better players will re-raise and trap you.

In all those YouTube videos, the commentators often use the term limp in.  This means that it cost the player little cash to see the flop.  Some players limp in when they should leap out.  If a player limps in very often, it indicates that they don’t really know what they are doing.

This is often a desperation tactic especially from poor or inexperienced players.  When an opponent goes all in with a lot of money in the pot, it is either an all out bluff or a sign that the player has a certain win.  Here good opponents rely on their own experience to decide how to proceed.  Inexperienced players usually play themselves out of games over time anyway so there is little to gain from calling an all in bet unless you are absolutely sure that it’s a bluff.