Learn how to play poker 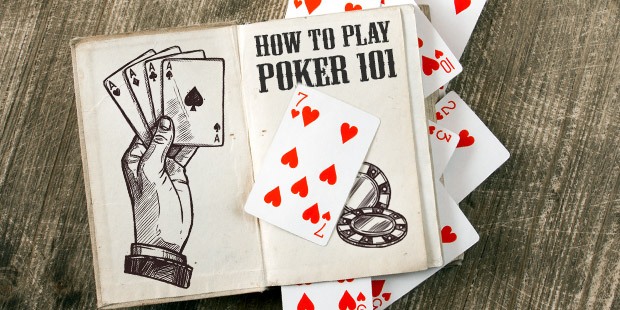 Learning how to play poker requires some effort, but it’s worth it. Millions of people think poker is the greatest game on earth, combining elements of luck, strategy, mathematics, psychology, logic, intuition, suspense, and excitement. We, at Everygame Poker, agree and offer this guide to how to play poker so you, too, can join in and experience the poker fun.

Poker - a Family of Games

The first thing to learn about poker is that poker is not a card game. Rather, it is an extended family of card games with names like Five-Card Draw, Seven-Card Stud, Texas Hold’em, Omaha Hi-Lo, Telesina, and many more.
As in most relatively well-adjusted families, the members of the Poker family of card games have certain family traits in common. The first, and most basic, is the cards. A standard poker deck has 52 cards comprising four suits: hearts, diamonds, clubs, and spades. All suits are equal: a Flush made of hearts is neither better nor worse than a Flush made of spades. Each suit has cards of 13 ranks, from lowest to highest they are: 2, 3, 4, 5, 6, 7, 8, 9, 10, Jack, Queen, King, Ace. Rank matters very much; that is why a pair of Queens beats a pair of Jacks, and it is why a Flush with a high card of 9 is better than a Flush with a high card of 8.
Another common family trait of the poker games is the order of hand rankings. This is so important—this is the key to who wins the poker game and who loses—that it is worth your while to stop here and make sure you know all the hands and their rankings before continuing onward in your poker education. So here they are, from the highest hand to the lowest:

So Who Wins the Poker Game?

It’s a good question, and the answer is usually found in the highest-to-lowest list of poker hand rankings that you just memorized. Three-of-a-kind is higher on the list than a pair, so my hand of three 5s will beat your hand of a pair of Kings.
If we both have the same type of hand—if we both have three of a kind—then we look at the rank of the cards making up that hand type. So my three 5s will beat your three 4s. And if both have a straight or we both have a flush, we determine the winner of the poker game by looking at the highest ranking card within the straight or the flush.
And finally, if we have the same type of hand and the same rank—if we both have a pair of 5s—then we look at the “kicker,” the miscellaneous cards we are holding in addition to our pairs, and the hand with the highest kicker wins the poker game.

The key to becoming a successful poker player is to accept the fact that you are going to lose a lot of hands. That’s an inescapable fact. Your goal when playing poker, therefore, is not to try to win every hand. Your goal is to try to win large amounts of money on your winning hands and to lose small amounts of money on your losing hands. That is the way to come out ahead in the long run and to win a poker game or win a poker tournament.
The big question, then, is how to arrange to lose small and win big at poker. This is where poker strategy comes into play. It takes some work and a lot of practice, but it is worth the effort. It involves understanding the cards and evaluating realistically your chances of winning in every situation. It means understanding your opponents and learning to read their betting patterns so you can get a reasonably accurate idea of the cards they are holding, while remaining unpredictable and inscrutable yourself so they won’t understand you. Occasionally it means bluffing. And it always means knowing when to hold ’em and knowing when to fold ’em.

As we stated at the outset, there are many different types of poker games within the poker extended family. There are some games in which each player gets his own set of cards; others with “community cards” that belong to everybody. There are some poker games in which you are stuck with whatever cards you happen to be dealt; others where you can trade in cards you don’t like in order to try to build a stronger hand. In some games, you get all your cards right at the beginning, and in other games, the cards are doled out slowly with intermediate betting rounds between each one. There are even poker games that add a Joker to the deck as a wild card to shake things up. As you can see, it is a large family with lots of members exhibiting their own individual quirks and idiosyncrasies.