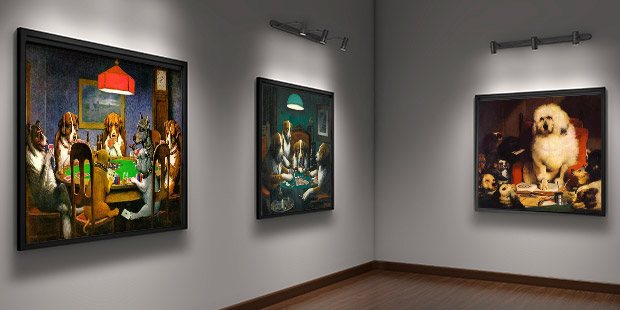 Starting with the basics, first of all, “Dogs Playing Poker” is not a painting but a whole series of eighteen related paintings, none of which is actually titled “Dogs Playing Poker.” And, saddest of all, the artist—Cassius Marcellus Coolidge—has been all but forgotten while his wonderful works live on.

The Life of Cassius Marcellus Coolidge

Cassius Marcellus Coolidge—known by his friends as “Cash”—was born on September 18, 1844, in the small town of Antwerp in upstate New York. His parents, Nathan and Martha Coolidge, were farmers and idealistic abolitionists. They named their son after Cassius Marcellus Clay, a prominent anti-slavery activist of the time. Cassius had two brothers and two sisters.

Cassius earned a degree in business at Eastman College in Poughkeepsie, New York. He pursued a variety of professions, including banker, pharmacist, and journalist, but seems to have always been restless to try something new.

He had no formal training in art but had an obvious natural talent. He earned some money painting cartoons for the local newspaper, advertisements for local businesses, street signs and house numbers in town, illustrations for children’s books, and quick portraits and caricatures. He also held the patent for the “Comic Foreground,” those life-sized plywood portraits of a cowboy or a ballerina or whatever with a hole where a person could stick his face and be photographed in his new guise. Cassius Marcellus Coolidge invented that.

Coolidge painted “Poker Game” in 1894. Such a deceptively simple title for such a brilliant work. This was the first of Coolidge’s dogs-playing-poker paintings. It depicts, in exquisite detail, four large brown-and-white St. Bernard dogs sitting around a table playing poker, smoking pipes or cigars, three wearing glasses, one holding a hand of four aces, a bottle of whiskey on the side table.

One bright light illuminates the poker table while the edges of the room fade into darkness. But it is the facial expressions—at once perfectly human and perfectly canine; wise and judicious and skeptical and searching—that transport “Poker Game” into the realm of masterpiece. “Poker Game” was sold for $658,000 at a Sotheby’s auction in New York on November 18, 2015.

Brown & Bigelow was an advertising agency based in St. Paul Minnesota. In 1903, it commissioned Cassius Marcellus Coolidge to produce a series of paintings of anthropomorphized dogs in various situations. The idea was that the paintings would be reproduced on calendars, cigar boxes, posters and other objects emblazoned with a company’s name and logo.

Nine of the sixteen Brown & Bigelow paintings depicted dogs playing poker. Others in the series show dogs playing baseball, dogs shooting pool, dogs testifying in court, dogs changing a flat tire, and dogs dancing at a New Year’s Eve party. They are all wonderful in their own way, but it is the dogs playing poker that have become immortalized in popular culture.

Telling a Story in Two Pictures

In “A Bold Bluff,” we see a St. Bernard with a lowly pair of deuces betting a big stack of chips. The other dogs at the poker table stare at him intently, trying to figure out: is he bluffing or is he for real? In the next painting, called “Waterloo,” we see the same dogs around the same table, minutes later. The bluff succeeded. The St. Bernard hauls in his huge winning stash while the other dogs howl in dismay. And we, the viewers, sense that in these two paintings, Cassius Marcellus Coolidge has captured the entire game of poker: the highs, the lows, the suspense, the endless capacity to surprise. “A Bold Bluff” and “Waterloo” were sold together for $590,400 at an auction in New York in 2005.

“A Friend in Need”

“A Friend in Need” shows five big dogs and two small dogs playing poker. But what the two small dogs lack in size, they make up for in wiles as one surreptitiously passes an ace under the table to the other. “A Friend in Need” has become the most famous painting in the series—reproduced on millions of posters, coffee cups, ashtrays, playing cards, neckties, and the like—and is often—albeit incorrectly—referred to as “Dogs Playing Poker.”

In 1910, Cassius painted “Looks Like Four of a Kind” with six dogs around the poker table including a big, somewhat smug, Saint Bernard holding the winning hand. And that was that. Today, the original “Poker Game” from 1894, the sixteen paintings for Brown & Bigelow, and “Looks Like Four of a Kind” together make up the grand oeuvre known collectively as “Dogs Playing Poker.”

A Late Marriage and an Enduring Legacy

Cassius Marcellus Coolidge remained a bachelor until 1909 when, at the age of 64, he married 29-year-old Gertrude Kimmel. The couple moved to Brooklyn and had one child, a daughter named Marcella.

Cassius died on January 13, 1934, at the age of 89, and was buried in Hillside Cemetery in Antwerp, New York. His name has been all but forgotten, but his work will live forever wherever dogs play poker or, at least, wherever imaginative humans find delight in the idea of dogs playing poker.