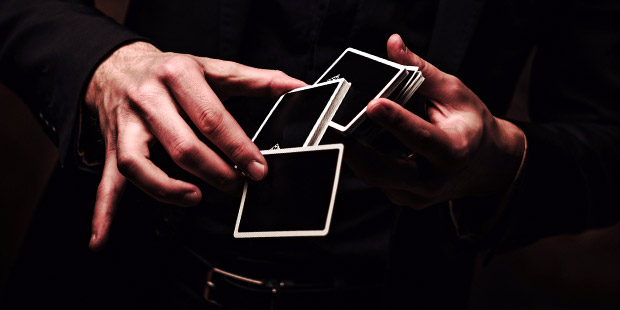 Every poker player is looking for an extra edge. One excellent way to improve your online poker playing is to see your poker game as if it were the opposite of a negotiation. At one time, businesspeople saw negotiations as zero-sum activities in which one side won and the other side lost. Today, negotiations are seen as win-win situations in which both sides get at least some parts of what they wanted. Not so in poker where we're going for the zero-sum outcome.

The key to successful negotiations in the modern world is for both sides to come to an agreement that satisfies them both. We strive to reach the point where both sides happily say “yes”. This is one of the keys of the modern approach to economics on a global scale.

Poker has too many unknown elements for both sides to happily say “yes”. The bettors tentatively may say “yes” but in their hearts, they mean “maybe”.

Here are a few aspects of modern negotiation that we can use effectively when we play poker online if we remember that poker is often diametrically the opposite of negotiations.

Negotiators are told to always ask for more than they expect to receive in the end. The modern approach to negotiations also pushes this tactic but nowadays it is seen as a de rigueur starting point from which the two sides will find the happy medium.

We often see in the YouTube clips that a master player is thinking about the correct sized bet to get the opponent to call or raise.

Reacting to an Offer

Negotiators are told to make a pronounced physical response to an offer that you have no intention of accepting. The physical response is also considered somewhat intimidating. In modern negotiations, such an overt negative response is often seen as disrespectful; it lowers your chances to get to “yes”.

In poker, a physical response may be a tell that you don’t want your opponent to read. If you bluff a tell, you’ll also be telegraphing that you might be bluffing a tell the next time as well. Bluffing only works when it so confuses your opponent that he or she has no clear idea of how to proceed.

So, in poker, even if you hit the flop in a big way, you need to practice making no response at all. When you hit the flop, the turn, or the river whilst playing online, your opponents can’t see you but they can respond to other indications that you have gotten a very good card. Consistent play is the key to poker success, whether online or at a land-based casino.

Although Daniel Negreanu is famous for his chatter at the poker table, when he needs to think out a situation he gets a lot quieter. Telling someone that his bet makes no sense, is an obvious bluff, or is in any other way inadequate is a surefire way to lose the respect of opponents.

We don’t exactly want our opponents’ deepest respect but we also don’t want to be seen as vulgar people. Especially in online poker, where our opponents are free to go elsewhere, we don’t want to develop a reputation for impudence.

In negotiations, we are told not to threaten. Now, this advice is not to keep us from becoming violent; it is meant to help us avoid confrontational moments such as when we might threaten to allow the negotiations to break down.

Bluffing, more than any other aspect of poker, demonstrates the zero-sum nature of poker. If the bluff works, you win and they lose.

However, when you win in poker, you have to be magnanimous. If you get bluffed out of a pot, you also need to be magnanimous. It is because of the zero-sum nature of poker that we have to repeat this advice to poker players. In negotiations, the idea is to arrive at a win-win solution in which magnanimity is a given. It's not the same in poker.

This is one area where negotiation and poker seem to have a lot in common. In both endeavors, we strive to win something that the other doesn’t want to lose or give up. The key to understanding why it’s different in poker than in negotiations is in the word “adversary”. In modern negotiations, the other side is seen as a partner with his or her self-interest but the overriding self-interest is to arrive at “yes” for both sides.

In poker, the adversary is still clearly seen as an adversary to be defeated.

This difference in approach is central to one of the biggest differences between modern day negotiations and poker. In negotiations, we try to “know our negotiating partner”. The better we know them and what makes them tick, the faster we can all arrive at the goal of “yes”.

In poker, we also need to know our opponents but here we have two goals. One goal is to get them to give up their share of the pot. The other is to get them to put more money into a pot that they are destined to lose. Both of these goals are dramatically different than the negotiation goal of arriving at “yes”.

Poker at its Best

Poker at its best is a game in which both sides are trying to either compel the other side to fold or to put more money into a losing pot - it's a win-lose situation. Negotiations at their best are a form of discussion in which the goal is the happy medium where all sides emerge contented - the classic win-win situation. So while the final goal may be different, the path to getting to the outcome is very similar.