How to Play Telesina Poker 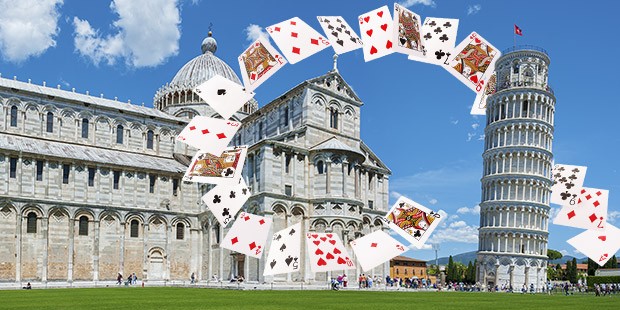 Telesina, also known as Teresina, is an Italian version of 5-card stud. It is a very popular poker variation in Italy but is not so well known in the rest of the world, which is a shame, because it is an interesting and very exciting poker game. Fortunately, Telesina is available for online poker play at Everygame Poker. Here is a step-by-step guide to how to play Telesina Poker.

Telesina is played with a deck from which all cards from 2 through 6 have been removed, leaving a 32-card deck containing the 7, 8, 9, 10, Jack, Queen, King, and Ace of all four suits.

A maximum of six players can play a game of Telesina. That is because each player receives five cards, so with more than six players there would not be enough cards to go around.

In Telesina, the suits are ranked. From highest suit to lowest, they are:

Thus, if two players have a flush in a game of Telesina, the flush of the highest suit wins the pot.

In addition, since the smaller deck affects the probabilities of obtaining the different poker hands, the order of the hand rankings is modified in Telesina Poker. In particular, and in contrast to the rankings in Texas Hold’em and most other poker variations, a Flush is ranked higher than a Full House in Telesina. The full order of hand rankings in Telesina, from best to worst, is:

It is interesting and unusual, but it is an important aspect of the game that you must become accustomed to if you want to win at Telesina Poker.

Playing a Game of Telesina Poker

A game of Telesina proceeds in well-defined stages. So let’s look at them one at a time to get a clear understanding of how to play Telesina Poker.

First thing, before any cards are dealt, all players must place a small bet called the Ante, in an amount determined in advance by the House Rules, into the pot.

The First Two Cards, the Bring In, and the First Betting Round

Each player receives two cards: one face up and one face down. The player with the highest Up Card must place a forced bet, called the Bring In, that is twice the amount of the Ante. The action then proceeds clockwise around the table. Each player may Fold, Call, or Raise, and the action continues until every player has either folded or has put an equal amount into the pot.

The Third Card and the Second Betting Round

A third card is dealt face-up to all active players, and the action begins with the player showing the best two-card poker hand with his two Up Cards. There is no forced bet in this, or subsequent, rounds. The first player may Check if he wants to, or he may Bet. If he checks, then the next player also has the option to Check or Bet. Once a Bet has been placed, players have the option to Fold, Call, or Raise. The action continues until every player remaining in the game has put an equal amount into the pot.

The Fourth Card and the Third Betting Round

A fourth card is dealt out, again face up, and a new betting round commences with the player showing the best three-card poker hand.

The Fifth Card and the Fourth Betting Round

A fifth card is dealt face up. At this point, every active player has one Down Card and four Up Cards. The betting round starts with the player showing the best four-card poker hand and follows the same rules as the previous rounds.

La Vela and the Fifth Betting Round

A community card called La Vela is now dealt face-up to the middle of the poker table. After the deal of the Vela, a fifth and final betting round takes place.

After the final betting round, the Showdown takes place. At this point, every player remaining in the game has six cards at his disposal:

Each player must construct a five-card poker hand from these six available cards. The player with the best five-card hand wins the showdown and takes the pot.

Telesina Poker is not an easy game to learn. It takes time to adjust psychologically to the abbreviated 32-card deck and it takes time to develop a winning strategy in a game where so much information is revealed publicly but much power resides in the single Down Card. But it is worth working through the difficulties. Telesina aficionados absolutely love this game, and there is a good chance that you will too. It is fast moving and action packed and always exciting. And if you can’t find Telesina at your local casino, come and play poker online and enjoy playing Telesina at Everygame Poker.