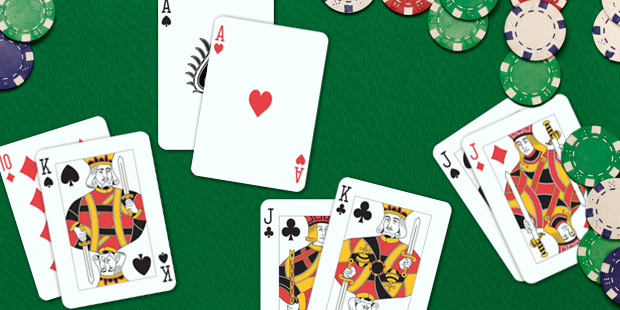 According to poker rules, the highest cards in the deck are worth more than low-value cards. Therefore, logically speaking, if you get a combination of two high cards – your chances to win are high. Or are they?

Sometimes, when inexperienced players get cards higher than a 10, they immediately put all their hopes on that specific hand, which automatically leads to reckless betting behaviour. However, those high cards can’t guarantee you’ll win. In some cases, the lower-valued cards will be worth more than a Queen or an Ace.

So before you play poker online, learn which card combinations can be deceiving and try to avoid them as much as you can!

The KT card combo is often referred to as the “sucker’s hand”. If your hand consists of those two cards, you might think that you have a decent chance to get a straight, or at least have a higher pair than your opponents. However, the stats are not in your favour, as you are more likely to get in second place rather than win the entire pot.

But it should be noted that this hand has some potential, as long as you know how to play your cards right. So be careful with this hand, and don’t rush into things when you have a KT combination on your hands.

In online poker, the Ace is one of the most powerful cards you can be dealt. And if you get two of them straight off the bat, it might seem as if you are going to be invincible. But be cautious: even though the AA combination is appealing as hell, it can plant a false sense of security in your heart, thus leading to great losses as the game unfolds.

The AA hand has a lot of value at the pre-flop stage, but everything can change once the other cards are revealed. Two pairs, three of a kind, and other combinations can beat your aces anytime.

The KJ hand is not much different than the KT one, except for the fact that it seems to be a bit less risky, therefore making players believe in it more than they should. It might seem that since the cards are closer in value, they might lead to an increased chance of creating a winning combo. But in reality, there are a lot of hands that can overpower the KJ. A two-pair or even a higher kicker can bring you down in mere moments, so be careful.

The JJ hand is one of the toughest hands to play. The chances that the flop will reveal higher cards, or that your opponents will have a Q, K, or A, are quite high. So if you believe in your hand, you should raise, and see how the other players react. If they re-raise, it probably means they have at least one of the higher cards in their possession. Be very careful when you bet on the JJ, and make sure that you’re not getting into a dangerous situation for no reason!

Some hands can be deceiving, and you should stay away from them if possible. Even though they might look promising at first, they won’t be worth much by the end of the round.

Now you know which card combinations can prove to be dangerous, are you ready to play?