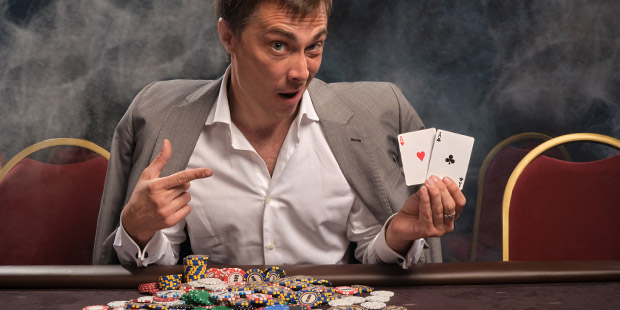 Beginning poker players need to learn many aspects of the game before they can master any of them.  In this second installment in our series of tutorials for beginning players, we will go a bit further in analyzing the efficacy or lack thereof of pre-flop bets.

It is obvious that if you are betting later in the pre-flop stage rather than earlier, you’ll be able to gather in a lot more information than you can when you have to bet early.  However, position involves more than gathering information.  You also have to evaluate the players who will bet after you!

Playing online poker adds another element of uncertainty to your pre-flop bets.  When people play poker online, they find it easier to come and go from games.  You’ll have to learn how players who have only recently joined the game bet and you’ll need to learn these traits quickly.

So, position is a lot more than betting late in the hand.  It is betting within the sequence of bets as the betting goes around the table.  Where you sit will be very important in every hand even though your turn to bet will go from early to late to early again.

Since we mentioned online poker above, we might add a few other thoughts about it.  Online poker is a great way to get the experience you’ll need to compete against other experienced players.  By taking a poker no deposit bonus, you’ll be able to extend your playing time.

Even though you feel that you are inexperienced, the fact is that most online poker players will be less experienced.  Most players don’t study every hand from every angle so, if you do, you’ll quickly accumulate a lot more useful experience than the average online player.

Position Changes after the Flop

The blinds bet last pre-flop but have to bet first after the flop.  Normally, most players are out of the hand by the time the dealer shows the flop so the biggest disadvantage in the pre-flop stage is the first player to bet, directly to the left of the big blind.

It is very risky to bet with a borderline hand in early position.  Let’s say that you raised with a pair of jacks and another opponent re-raises you.  Both of you have raised the big blind so his re-raise is a powerful play.  Should you fold when it comes back to you or should you at least call the re-raise.

What Does the Big Blind Do?

In general, the big blind will try to defend his ante but if the blinds are small and the big blind has a very poor hand she will fold.  If both blinds have folded and only you and the re-raiser are left, you need to first consider how much money you need to put in the pot in order to see the flop.

If the amount you need to put in is well within your stack, you might call in order to see the flop.  You could hit three-of-a-kind.

If the big blind stays in the hand and especially if both blinds stay in, you have a clear signal to fold.  This example is for a borderline hand when you bet in early position.  As you can see, if you have less than a borderline hand in early position, you should fold.  It should also be obvious that the strategy will change as quickly as the next hand as you bet after at least one other player.

The players in the middle of the betting rotation are said to be in middle position.  This is also a poor position to be in since players bet after you and the blinds already have money in the pot that they might want to defend.  However, if poker was as simple as fold until you’re in late betting position, it would be a very boring game indeed.

In middle position, a hand that you might have considered borderline when you were in early position might not seem borderline anymore.  The same pair of jacks we spoke about earlier may now be if not a strong hand then no longer a borderline hand.

Here is another example of the vast advantage you get when you play poker online.  You get a lot of hands in and every hand has to become a learning moment for you.

We have spoken about or hinted at some mistakes players make pre-flop.  One more big mistake is in trying to determine what the flop might be.  This is impossible to do.  In this sense, poker is not like chess.

In chess, you can say if I do this he will do that and so on.  Really good chess players can see several moves ahead because they can see what the opponent’s best response should be to his own play.

In poker, you only have four betting rounds.  It is impossible to see what a player might have based only on the cards you have and the way she bet.  It is hard enough to concentrate only on what you know without trying to fathom information that you don’t know and can’t know.

The Fallacy of Predictability

We are already out of space and we barely covered position in the pre-flop betting stage.  We will continue from this point in the next part of our tutorial for poker beginners.