As the Flop Comes Down, the Math Wheels Start Turning 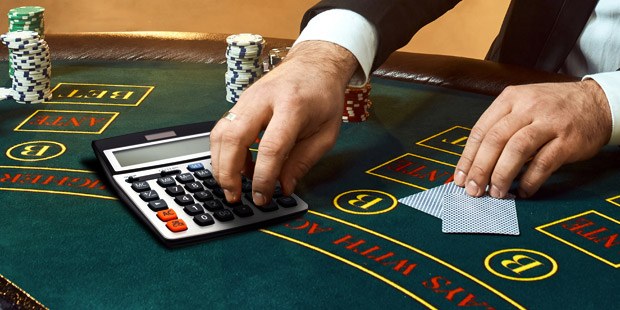 We are about to see the flop.  We have covered most of the nuances of pre-flop betting and the far more common folding.  Now, we have stayed in the hand and we will see the flop.  It’s time to begin the long march through poker math.

What is the First Aspect of Poker Math I Need to Learn?

Math also comes into play before the flop but to a much less degree.  The answer to the question is: What are your odds of getting a good hand?  We aren’t there yet.  Let’s first review the first two parts of this tutorial.

We taught in the previous tutorials that before the flop you usually fold any hand that isn’t in the top echelon of hands.  We also spoke about how valuable it is for beginners to play poker online.

Online poker gives you a huge number of hands but it also saves you your travel costs and it allows you to stop when it is correct to stop.  At a land based casino, most players just keep on playing even though they are tired or hungry simply because they want to get their money’s worth of the costs of getting to the casino.

That has to do with who your opponents are among other considerations.

This adds three cards to everyone’s hand.  Everyone thus has five cards which is a full hand in many poker variations.  The odds of flopping a powerful hand are exactly the same in Texas Hold’em as the odds are of being dealt that hand in five card draw or of getting that hand with your draw.

How Many Cards are Still in the Deck?

This is one of the most basic aspects of poker math and one that many beginners struggle with.  You see five cards.  That leaves 47 cards “in the deck”.  Of course, technically that is not the case.  If there were eight people at the table, each received two cards.  That is 16 leaving 36 in the deck.  Adding the flop leaves 33 cards really in the deck.  But when we make the most basic and most preliminary evaluation of our hand’s potential, we have to start with the idea that any card we don’t see is still in the deck!

It also leads to one fundamental truth about poker: sometimes you will do the math and conclude that you should stay in the hand, yet every card you need to win has already been dealt and most of them were discarded.  The irony of poker math is that not only is it not perfect, sometimes it leads you very far astray.

Still, poker math is a very valuable tool for you to use to determine what your next move should be assuming that your cards are still in the deck!

The Odds of Getting the Card You Need

Let’s say that you stayed in the hand with king-queen.  The flop came out jack-ten and another card.  Now, you can stay in hoping for an outside straight.  What are the odds that you will hit the outside straight?

You need either an ace or a nine to get the outside straight.  Even if you do get the straight, there is no guarantee that you will win the hand.  As straight is a strong hand but does anyone have a good shot at a flush?  A flush will beat your straight.

Maybe an opponent stayed in with a pair of jacks and now has three jacks.  At this point, his hand beats your hand but if you get the straight your hand will be stronger unless he hits a full house or four of a kind.  As you can see, figuring the math for every possible outcome of both you and every opponent who stayed in to see the flop is quite a challenge!

How Many Cards Do You Need?

This is the first question you need to ask yourself.  You might have a strong holding and can get even stronger with some very good luck.  For example, if you stayed in the hand with two consecutive suited cards and the flop gave you a flush, you have a very powerful hand.

It is also possible in some cases to get really lucky and to turn the flush into a straight flush!  To do so, you would need two cards.

In most cases, if you need two cards to make a hand, you would fold unless everyone else still in the hand checks.  Another reason to stay in such a hand is if you are playing in a very low stakes game and an opponent made a very low bet that you can easily cover.

How Many Cards are there that Can Get You the Hand You Want?

This sounds like a repeat of the question we asked above but in fact it is quite different.  You need only one card to get the straight but there are still eight cards that can help you get the straight!  There are four nines and four aces.

And now we start the math!  You divide 8 by 47.  Eight is the number of cards that can help you and 47 is the number of cards left in the deck.  At this point, you don’t have to do the math to several decimal places.  Thank goodness!  It’s enough to know that you have a one in six chance of getting the straight.

Your odds of getting the straight are only 6-1.  That means that the pot odds it isn’t a good idea to risk 6-1 odds in order to win a 4-1 return.

In our next installment of this long tutorial for beginners, we will take off where we are leaving off—with a longer discussion about pot odds.