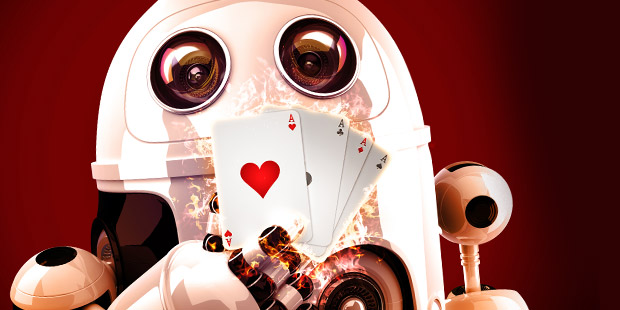 The Background: Machine vs. Man

Fast forward about a century-and-a-quarter to 1997, when the computer Deep Blue defeated world chess champion Garry Kasparov in a six-game chess match. It was a huge accomplishment in the development of Artificial Intelligence but still, without in any way disparaging Deep Blue, there are a couple of caveats to take into account:

So the machines had conquered steel driving in the nineteenth century and chess playing in the twentieth. Poker remained unconquerable until well into the twenty-first.

The problem with poker is that it is a “hidden information” or “imperfect information” game, since you don’t know the cards in your opponent’s hand and he doesn’t know the cards in your hand. It is difficult for a computer to devise a perfect strategy when playing against the unknown, and that is why it was so difficult for so many years to create a poker-playing AI.

In 2017, a full two decades after Deep Blue played chess, a poker-playing AI called Libratus was created. And Libratus was great. It handily defeated top poker professionals in thousands of hands of play.

It was a big step forward for AI, but still, a caveat remained. Libratus played only Heads-Up Texas Hold’em. This is a two-player game, one-against-one. Multiplayer poker was beyond its capabilities and remained a bastion of human superiority.

Pluribus, the first computer to play multiplayer poker, was created by Noam Brown, a scientist at Facebook AI Research, and Tuomas Sandholm, a professor of computer science at Carnegie Mellon University.

It basically learned to play poker by playing millions of games against itself, making note of what worked and what didn’t, learning from its mistakes and from its successes and continually refining its strategy and becoming better and better.

It also got some coaching from Darren Elias, a human poker champion who pointed out Pluribus’s mistakes to the scientists so they could tweak the program.

The final test involved thousands of hands of Six-Player Texas Hold’em online poker played by Pluribus and five highly-ranked professional human poker players. It is worth noting that, when you play poker online, physical “tells,” which are beyond the realm of a computer, become irrelevant. It is also worth noting that the players were identified only as “Player 1,” “Player 2,” and so on, so the human players did not know which of their opponents was actually an AI program.

Well, Pluribus was spectacular! It bluffed. It saw through its opponents’ bluffs. It varied its play so no one could decipher it. It defied conventional wisdom with donk bets that paid off. It knew when to hold ’em. It knew when to fold ’em. It won the equivalent of about $1,000 an hour if it had been playing for real money, and mind you, this was against some of the top professional poker players in the world.

In short, Pluribus was brilliant!

So what does the success of Pluribus imply for the future of our beloved game of poker? Optimists say that human players can study Pluribus’s strategy innovations and learn to play poker online better than ever and thus advance the game to ever higher levels.

Pessimists say that online poker is doomed; that bots will take over the online poker rooms and leave no room for humans to compete. Of course, only time will tell which view is correct. In the meantime, have fun and good luck at the tables!