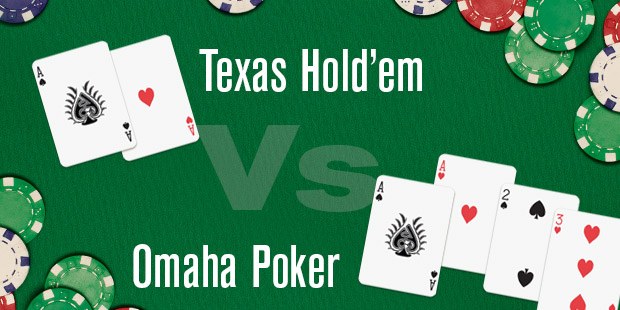 Poker is a perennially popular community card game that was born in the Wild Wild West and came of age at the WSOP.  It is a game that has so many different layers you literally have to be a mathematician, game theorist, actor and intimidating enforcer to prevail.

It is also a game that has made the leap from the sawdust joints of Downtown Vegas to the World Wide Web.  Now you can swagger on through to your sitting room, fire up a cheroot and play poker online - thanks to Everygame, the best online poker room in cyberspace!

If you have never experienced the rush of raising or calling on the flop, bluffing your way to a seriously large pot or going all in with the deepest of stacks, you haven’t really lived.  Before we get into the complexities of Texas Hold’em versus Omaha let’s take a look at the basic structure of online poker.

Notwithstanding which variant of poker you play, the betting rounds and game play are largely the same.  There are slight rules variations that apply to Omaha but we will address that a little further down the page.

When you play poker online the game starts when the two players on the immediate left of the dealer place initial bets known as the small blind and big blind.  The dealer then deals two cards face down to each player.  These cards are known as the hole cards.

Once the players have looked at their hole cards, betting begins in a clockwise position from the big blind.  Each player has three options.  He or she can:

Provided there are two active players left in the game, the dealer burns one card and deals three community cards to the table face up.  This is known as the flop.

The flop is followed by a betting round where each player either calls, raises or folds.  Once the bets are made, the dealer burns a card and adds one face up card, called the turn or fourth street, to the flop.

Another round of bets is made and the dealer then adds the fifth and final card, known as the river or fifth street, to the table.  After a final betting round the showdown occurs and the player with the best poker hand wins the pot.

Now that you have a better understanding of how to play poker online let’s explore the pros and cons of playing Texas Hold’em versus Omaha online poker at Interops Poker.

Texas Hold’em is the game of choice of the poker purists.  It is also the most popular variant of poker by far- not only right here at Everygame but in the main events of the World Series of Poker and dozens of other live events and online poker tournaments.

The reason why it is favoured by the money guys is because only two hole cards are dealt to each player.  That means it is easier to determine whether they are holding a good or bad starting hand.

As there are fewer hole cards on the table the odds of the other players having an opening hand that matches or beats theirs are slim indeed.  A pair of aces, for example, is the best possible opening hand.  It also has the best odds of generating a favourable outcome over the flop, turn and river.

Two aces naturally beat all other pairs.  As the majority of Texas Hold’em games are won on two pairs or less, it is highly unlikely the other players are holding a potentially winning hand.

With two aces as a starting hand there is always a chance of hitting an ace high three of a kind, straight, flush, full house or four of a kind - rare hands that will almost certainly win the pot!

With Omaha on the other hand, four hole cards are dealt to each player.  That means there are twice as many cards in play… and that enhances the strength of the majority of starting hands in a big way!

Even if a player does have a pair of aces amongst the hole cards, the odds of the other players holding a matching or stronger hand such as a two pair or three of a kind are reasonably high.

If you are starting out on the online poker journey Texas Hold’em is probably a slightly easier game to master. That why we suggest you ante up and play poker online like true-blue Texans before levelling up and moving north to Omaha Nebraska!

Omaha is a highly entertaining variant of online poker.  Players are dealt four hole cards and have to use exactly two of those cards to form a five card poker hand.  That restricts the use of the community cards - the flop, turn and river - to just three.

Along with limiting the use of the board, the four hole cards in Omaha make it a lot more difficult to predict what the other players are holding and whether a starting hand is a potential winner.

Even when a player has a killer of a starting hand - such as two pairs king high - there is every chance it will be beaten by a low straight, flush or full house.  As they say in Nebraska, Omaha is a nuts game!

Only the Best Hands Win in Omaha

That does not mean Omaha is best played by crazy people.  It means that the only way to win the pot is to play the best possible hands given the community cards on the board.

In other words, playing low cards - whether they are suited, matched or not - will cost you big time in terms of hard cash.  With Omaha patience is key.  You have to learn to wait for the right hands and fold on everything else.

The difference between Texas Hold’em and Omaha is in Hold’em you will win the pot with a straight or a flush 99 percent of the time.  In Omaha, on the other hand, a low straight or flush will be beaten by a high straight or flush more often than not.

At the end of the day there is no ‘best’ when it comes to online poker.  Both variations are equally enjoyable but you can’t get away with average hands when your play poker online the Omaha way!