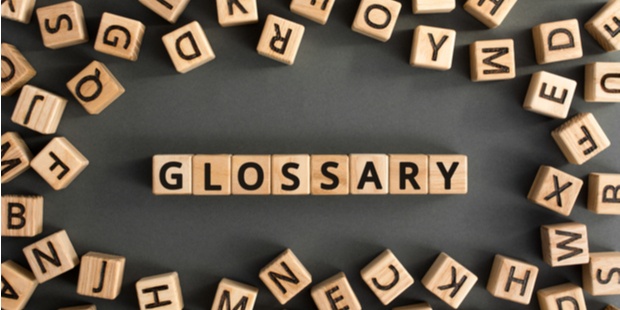 Amateur and professional poker players throw around seemingly unrelated terms as part of their “club”.  If you’re interested in being seen as a real player, you should know about some of these terms used by land-based and online poker players that refer to poker bonuses, varying card hands, types of chips, opponents’ habits and more.

Find out a little more about some unique poker terms.

A straddle is a blind raise that you make before the cards are dealt. Your raise can double the size of the big blind. If there has not been a raise, once the preflop action reaches the straddler, that player is given the option to raise. A player making a straddle bet is sometimes referred to as “the straddle” when describing the hand.

To play the board refers to showing down when your cards don't make a better hand than what is shown on the board in hold 'em. For instance, if the board is 4-4-9-9-A (no flush possible) and you have a 22, then the best possible hand you can make doesn't use any of your cards and you must “play the board.”  If you play the board, splitting the pot with all remaining players will be the best that you can do.

Variance refers to the measure of the upswings and downswings that your bankroll sees.  There’s no reference to how well you play. The higher your variance, the wider swings there will be in your bankroll.

Dark bets refer to bets that you announce on the next betting round before the card(s) for that round are dealt. If a player announces such a bet "in the dark," s/he must be first to act on the coming round. The announced bet is binding regardless of which card(s) are dealt.

For example, in Hold 'em, one player raises while another calls in position.  Then, before the flop appears, the preflop raiser might say something like "I bet $100 in the dark." When he says that he means that whichever cards come out, flop action begins with that $100 bet.

Ace Up the Sleeve

To have an ace up the sleeve has become a popular expression that refers to having a special opportunity that is concealed from others, but will give the holder an advantage. The expression comes from the game of poker and refers to cheating by concealing an ace up one’s sleeve with the intention of reintroducing it at some point in the future when the opportune time presents itself. In popular vernacular, having an “ace up the sleeve” can refer to any form of cheating as well as to a hidden, yet legitimate advantage.

If someone talks about a “wet board” in Hold’em or Omaha they are referring to the texture of the community cards. A “wet board” refers to one in which the community cards are connected or suited in ways that provide many possibilities to make flushes or straights, or to provide draws for either or both. For example, a board of a ten of clubs, a nine of hearts and an eight of clubs would be considered to be a “wet board.”

A term used in Omaha or Hold ‘em to refer to a flop containing three different suits. In such a hand, there’s no opportunity to complete a flush on the turn. Rainbow can also refer to  a complete five-card board that has no more than two of any suit -- again, when no flush is possible.

The most  reference of acey ducey is that of a two-pair hand in which one pair is aces and the other pair is deuces.

Others refer to "Acey-deucey"  as a slang term referring to a hand in which there’s an ace and a deuce in Hold ‘em poker.

"Acey-Deucey" is also the name of a non-poker game in which players bet on whether or not the rank of a third dealt card will fall between two others already dealt. The game of acey-deucy is also called "Red Dog."

“Hand-for-hand” play occurs in multi-table tournaments, just before the money bubble bursts and payouts begin. It can also happen after the tournament is in the money and just before another pay jump occurs. In hand-for-play,  each remaining table must complete a single hand before the next one is dealt to ensure that all tables play the same number of hands.

The rationale for hand-for-hand play is that it helps prevent players, who might be hoping for an elimination at another, faster-playing table, from stalling in order to slow down their table.

If a player possesses four consecutive cards whereby one additional (consecutive) card is needed at either end to make a straight, they are said to have an open-ended straight draw.  For instance, in Hold'em, you might have a nine of spades and an eight of clubs. If the flop comes out to a ten of diamonds, a seven of hearts and a two of clubs, you have an open-ended straight draw (10-9-8-7). Now you need any Jack of any Six to complete your straight.