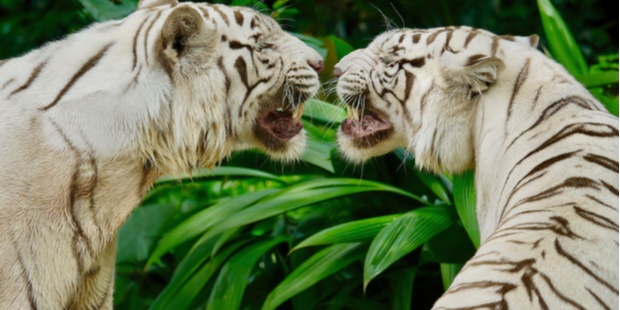 Rivalries in poker aren't all that rare. Over the years, some of the best online poker players have taken part in grudge matches, not unlike the one Negreanu and Polk have recently been a part of.

Watching those rivalries begin and evolve is always fascinating, as they usually entail plenty of drama and intrigue, both at the table and away from it. Let's take a look at the most public and entertaining poker rivalries in recent years and decide: who was in the right, and who was in the wrong?

While Daniel 'Jungleman' Cates is a renowned poker pro, David 'Viffer' Peat is considered as a small-time player, albeit a popular one. During his career, Cates raked in a profit of more than $7m, while Peat's total earning reach a modest sum of $277,047 in live events.

So, what made this unlikely pair to butt heads? It all started when Jungleman competed against heads-up expert Tom Dwan. In 2010, the two agreed to play at four tables of No-Limit Hold'em for 50,000. The agreement was that if Cates would beat his opponent, he will get another $1.5m as an extra prize. While the game started as planned, Jungleman and Dwan played only 19,335 hands by 2011. Apparently, Swan refused to continue the challenge, but he still paid out a large sum of money by 2017.

Unfortunately, Cates and Peat had a side bet on the outcome of the match, as Peat believed Dwan would win. As it turned out, Cates, who had the upper hand in the original challenge before it came to a sudden halt, wanted Viffer to honor his side of the bet and pay up. But since it was never completed, the latter claimed that the bet was null and void. The matter kept resurfacing as the two met up face to face several times, but it was never officially resolved.

Not surprisingly, Daniel Negreanu was involved in poker scandals ad feuds on numerous occasions, some of them short-lived and some of them - not so much. Negreanu's disagreement with Annie Duke, a highly successful US poker pro, began in the early 2000s. Back then, Negreanu was only starting out in the industry, but his opinionated nature made some noise and caught the attention of the public.

At that stage of his career, Negreanu was a part of an online poker community, where he mentioned that a certain player was acting like a bully. While he didn't mention specific names, he added "she" to one of his comments. That clue allowed another player – Howard Lederer, who is Duke's brother – to realize who Negreanu was talking about. And he wasn't happy!

Long story short, Duke's brother called Kid Poker out, and the latter answered with some accusations of his own. A few months after this incident, Negreanu posted another long comment about Duke's integrity and poker play, but she chose not to respond. Only years later, when publishing her autobiography in 2005, Duke referred to Negreanu as a bully.

In the next five years, the two played at the same tables but didn't show their contempt in public. However, in 2010, Negreanu's feelings towards Duke resurfaced as he mentioned her in an interview, where he used some derogatory words. That led Duke to send a letter to Negreanu's online sponsor, which forced him to issue an explanation – but it wasn't a direct apology.

After that, Kid Poker mentioned his rival on various occasions, and it seems as if they will forever remain enemies at heart.

Sam Grizzle, who recently passed away at the age of 67, was a well-known poker pro. Over the years, he won a total of $1,354,877 in live events, but he is mostly known for his feud with Phil Hellmuth – which got physical at one point.

Hellmuth, who won a record fifteen WSOP bracelets, played against Grizzle in downtown Vegas back in the late '90s. The two didn't manage to hide their contempt for one another all that well, and like they often did in the old days – they decided to solve the matter outside. When in the parking lot of the establishment, Grizzle managed to punch the taller opponent, and that was the end of it.

Over the years, the two often met at poker tournaments and games, but things never escalated that much ever again.

Whose Side Are You On?

Feuds and rivalries aren't uncommon in the poker industry, and they are always entertaining and exciting! Out of all the rivals we've mentioned, who do you think had the right to hold a grudge? And who was acting like a bully?